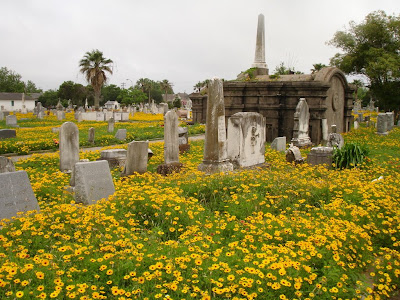 Last Saturday I donned my best suit and tie and drove to the local funeral home, where I faced the unenviable task of expressing condolences to a family suffering through the worst kind of pain: the death of the man who was both husband and father.

Funeral homes rank just below hospitals as Worst Places I Want to Visit, and it’s still a pretty close race.

The reasons weren’t all that obvious. I knew what was waiting for me on the other side of this world, knew that however much suffering and pain involved in getting there was worth the price, and knew that, in the end, everything would be just fine.

I didn’t like funeral homes because I was afraid of death. I was mournful of the pain the dead left behind. Like the pain felt by the wife left to tend to her family, the children left to mourn their lost innocence, and the parents who were burying their son. Parents who once found comfort in knowing they would pass first through the thin veil between this world and the next, but who were now left with the hard-won knowledge that it’s often the things we most take for granted in life that disappoint us in the end.

Standing in front of the open casket, I pondered who this person was. Son and brother. Soldier. Factory worker. Known to his family as Sweetheart and Dad, Lover and Best Friend. Lived a good life. Was a good man.

“It was so sudden, wasn’t it?” sobbed a stranger beside me.

I nodded to her. She was right. He left for the grocery store and offered a quick “Be back soon” to his family, but what came back was merely the earthen vessel I was looking down upon. One moment here, the next gone.

I moved on to others who represented a small portion of his friends and family, engaging myself in the polite and hushed conversations that funeral homes require. Small talk, mostly. Weather and crops first, which merged into recollections of the deceased second, which moved on to the sadness last.

Each exchange brought a variation of the sobbing woman beside me had said moments before.

Echoed by others as:

“He passed so quickly.”

“He died far too young.”

“There was no warning.”

I listened to them all, keeping my answers brief. A Yes to the question of “Horrible, isn’t it?” A nod to “Such a shame.”

A shame, yes. Unfortunate and horrible. But as I looked upon the solemn faces of the gathered, I realized there was far worse shame and misfortune in this life. Far worse horrors.

That life must simply be endured is among the worst of lies. We are not merely to tolerate this world, but overcome it. We are called not to plod on, but to laugh and skip.

God commands us not to guard our hearts, but to give them freely. To feel pain instead of ignoring it, if only so that pain can turn to greater joy. To face our struggles with steeled eyes and iron will. To take the arrows of circumstance in our chests, marching forward, and not our backs in retreat.

This is our duty. Our charge. And to fail is to fail both ourselves and our God. It is to meet the end before our ending. That is the worst death. Not the one that robs the body of its soul, but the heart of its passion.