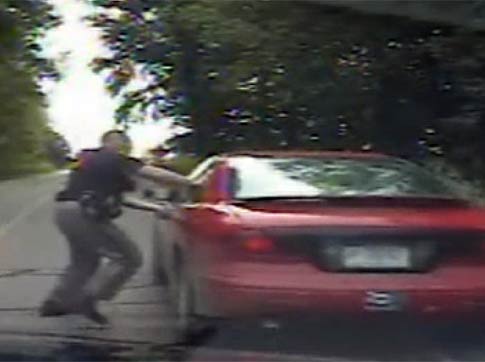 Though Father’s Day is passed, I couldn’t help but write about what was going on in Huron County, Michigan, while I was in the backyard playing baseball with the kids.

That was around the time a frantic driver called 911 and said, “Uh, yes, I’m on Kinde Road outside of Caseville, and believe it or not, I just passed about a 5-, 6-year-old kid flying down the road with a red Pontiac Sunbird.”

Turned out, the kid was a boy. And he wasn’t five or six, he was seven. He was flying down the road, though—70 when the police found him racing down a rural road, standing up on the floorboard so he could work the gas and see over the steering wheel. Two Huron County deputies boxed in the Sunbird and managed to stop it on the side of the road.

They found the boy barefoot and dressed in pajamas. Crying.

His father’s home was twelve miles away. The boy was staying with his mother and stepfather in Sheridan Township. He took the car while his stepfather was gone and his mother was asleep.

Woke up that Father’s Day morning, and just wanted to see his dad.

I’ll be honest—that broke my heart.

Yes, he could have killed himself. Or someone else. And no doubt he caused a considerable amount of grief to his mother, who was contacted shortly afterward by the police department and had no idea her son was gone. But to me, those things matter little. They’re relegated to the periphery of this story—there, but not enough to matter.

What matters, what I cannot get out of my head, was that this boy simply wanted his father and his father was not there.

Why, I don’t know. There are a great many reasons why mother and father divorce. Some are valid, many are not. Regardless, I doubt this young boy cared what those reasons were. And rather than suffer the silence most children of divorced parents must endure, he took it upon himself to do something, regardless of how dangerous that something may have been.

He wanted to see his dad, and he was going to do whatever was needed to do it.

I can’t get that out of my thoughts.

This post isn’t meant as a denouncement of divorce or proof that regardless of what experts say, children are not always the emotionally pliable and resilient people they are made out to be.

No, this post is about the importance of being a father. Of being there for your children and being a part of their lives. Of allowing yourself to be present regardless of the situation.

I think men tend to define their lives by the work they do. If one man is introduced to another, the first question after pleasantries are exchanged is invariably, “So what do you do for a living?” Always that, at least in my experience.

I suppose this is mostly due to the fact that ours is a gender given to action rather than reflection. We men enjoy doing, getting things done. And I’ll say that’s me at times, though I’m trying to be better. I’m trying to understand that my life won’t be judged by the job I have but the life I live.

It’s the difference I make, not the money.

I figure I’ll be doing well if I inspire in my children the sort of love and devotion that would push them to go to any lengths to see me, if only for a few small minutes.

I figure I won’t be doing well at all if they have to steal a car in order to do it.

There are statistics galore that prove beyond all doubt the importance of a mother in a child’s life, but let me tell you this: fathers are just as needed. Good fathers, present fathers, loving fathers.

Just ask a barefoot and pajama-clad young boy alongside a country road in Michigan.

Because but for the grace of God, that could be your son.