I really wanted Patrick Dowling to be an angel.

Chances are good you’ve heard the story. Two Sundays ago, a young woman named Katie Lentz was driving to Jefferson City, Missouri, to attend church with friends. Near the town of Center, a car collided with hers, leaving Katie trapped in a ball of crumpled metal. Rescue teams arrived, but the equipment necessary to free Katie failed. Though she remained alert enough to talk of her church and her college studies, Katie’s vital signs began to fail. If she did not get to a hospital soon, she would die.

The emergency crews decided to push her vehicle upright—a dangerous and life-threatening course of action, but the only choice left. That’s when Katie asked if someone would pray with her, and that’s when a man dressed as a priest stepped forward and said, “I will.”

No one knew how the priest had gotten there. The road was blocked off for two miles in either direction. None of the rescue personnel, many of whom lived in nearby communities, recognized him. And yet the priest approached Katie’s car and began praying with her, telling them all only to relax, that help was coming. Twenty emergency workers helped to sit the car upright. Katie’s vital signs rebounded. Another rescue team arrived, carrying fresh equipment. Katie was freed and rushed to the hospital.

When the emergency personnel turned to thank the priest, they found he had vanished. No trace of his presence remained. Adding to the mystery was that of the nearly seventy photographs taken at the scene, not one of them showed the priest. Thus was born the legend of the Missouri angel.

I love stories like that. Crave them, in fact. They are a reminder that we are never truly alone. We are watched over. Protected, even in the midst of such pain and danger. By the time I read of Katie’s ordeal, her story had been picked up by news media worldwide. Everyone wanted to find the mystery priest. I only shook my head and smiled. They’d never find him, because that hadn’t been a priest at all. 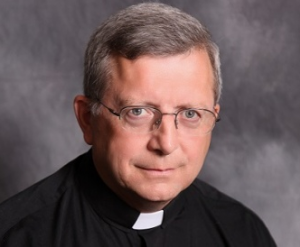 He had been returning home from delivering Mass in Ewing, Missouri, when he’d arrived at the scene. He parked 150 yards away and made his way forward, believing there was something he could perhaps do. The Sheriff granted him permission to approach the scene of the accident. That’s when he heard Katie ask if there was someone who could pray with her. After, when she was extracted and taken to an awaiting helicopter, Father Dowling hadn’t disappeared at all. He’d just walked back to his car.

There hadn’t been an angel along that stretch of highway near Center, Missouri, at all. There had just been a man.

I’ll be honest—a part of me didn’t want Father Dowling to come forward. I’d rather he’d remained anonymous. Let people think it was an angel. Let them believe. These are dark times, after all. We need that reminder of a watchful God and loving Father, Someone eager to send help.

I’ve since changed my mind, though. As much as a part of me still wishes it had been a genuine member of the heavenly host with Katie Lentz that day, I’m fine with it being a simple priest. Glad, even. Because these are dark times, after all, and we all need a reminder that we’re not alone. We all crave that kind touch of grace and mercy from God’s hand. We all need to know He’s eager to send help.

We all want to know there are angels near.

And I believe God sends them. Every single day, and to everyone. Sometimes those angels come as mystery and light. Other times, they come as people like you and me.