It isn’t often that I lend this space to someone else, but then Brennan McPherson isn’t just someone else. I had the pleasure of endorsing his first novel, Cain, which is a fantastic retelling of the world’s first murder.

His publisher is doing a giveaway this week, which you can enter by clicking on this picture:

There’s a lovely little video that made its rounds in the viral community recently.

In the video, three girls are trying to do a hair-tutorial video, and their curious cat gets himself stuck in a lampshade and starts yelling like an old man who just stuck his arm in an atom smasher.

The title of the video claims the cat was electrocuted, and judging by the cat’s yells, and its one-legged, tail-spinning dance, and the lamp’s subsequent tumble to the ground (out of view of the camera), it was certainly in pain. After the girls run around screaming, the sounds calm, and one girl runs to the camera and whispers, “oh my God,” as she shuts off the camera.

The viewer is left wondering, “Was the sudden hush due to feline decapitation? In trying to get the cat un-stuck, did they pop its head off?”

A friend sent the video to my wife and said it was hilarious, so I watched it smiling at first, expecting cat-induced-hilarity. “Silly kitty, getting caught in the lampshade, hah-hah! Hee-hee, silly kitty!”

40 seconds later I felt nauseas wondering if a little creature was just murdered by an inanimate object in front of three impressionable little girls who were highly disturbed by what they saw (and what the camera didn’t).

Apparently the cat was “fine,” though the manly yells it was emitting leave me in doubt as to what that word means. Alive, maybe. What about cuts, broken kitty bones, etc.?

You may have guessed already, but I am easily disturbed, and highly compassionate toward living things.

You may think it’s funny to joke about shooting cats. I don’t. Don’t try it around me. I won’t laugh. As ridiculous as it seems, I even get a little sad when the tomatoes in my garden die because I haven’t watered them enough.

You may think it ironic that my debut novel, Cain, is about the world’s first murder. But to be fair, the book is about the terrible impact of pride and jealousy, and though it has much violence in it, it’s really anti-violence at its core.

I suppose it doesn’t help that my wife and I own two cats, and that the video reminded me of a few predicaments our one cat, Jazz, has gotten himself into. One day he got his toenail stuck in the curtains. I laughed at first, but when he began flopping around, twisting his arm grotesquely and screaming like a dying woman, it was no longer funny (okay maybe it was a little funny). I had to go surgically remove The Idiot (one of his nicknames) from his predicament.

Thinking back on it, now that I know The Idiot is fine, it was funny. But not because he got hurt. It was his reaction that was funny, and the fact that he could get so stuck he thought he was going to have to ditch his arm to escape.

Another time I called The Idiot up from the basement and he sprinted his merry way up. Only problem was he slipped and smashed head-first into the middle of the staircase. When I peeked my head around the corner and saw him sitting woozily, shaking his head and looking troubled, I admit it, I laughed. But I also felt really bad for the poor little guy, and picked him up to comfort him. Because I’ve been there.

Well…I haven’t necessarily BEEN THERE, but I’ve stubbed my toe on my fair share of couches, and stepped on a lego or two.

DISCLAIMER: I grew up in a hunting family. All my relatives were hunters. I even went hunting. I’ve shot several deer. A few squirrels. And many other animals. In short, I’ve murdered my fair share.

But death has never been funny to me. To laugh at death is what a boy does in an attempt to seem manly. A real man is compassionate toward those afflicted by pain and loss.

So going back to the video: the thing that disturbed me most was that so many people clicked on it because of the description.

It made me wonder… what about a cat getting electrocuted could possibly make a person think, “I want to see that”?

Why would anyone want to watch a living creature electrocuted? Electrocution is extremely painful and can be deadly. So why would that caption, out of any, be what draws people to watch?

Could it be we are just downright sadistic? Certainly some are. But what about us? Why do we engage with the entertainment we do? In a world so saturated with entertainment, are we in danger of turning barbaric? Has the internet become the new colosseum?

“Sheesh, kid, settled own. It was just a cat video, and the thing was fine.”

I know, I know, I’m being overly-dramatic. But I think it’s worth it to consider our own entertainment habits. I’ve always thought of the people who went to the colosseum as extremely barbaric. But is it really all that different from our modern entertainment? In many cases, what we see on the big screen isn’t real. It’s make-believe colosseum stuff. But with the advent of YouTube, things have changed.

If we’re not carefully guarding what enters our minds, shouldn’t we be concerned with what might come out? Let me know what you think below!

Catch up with more of Brennan’s writing at his website, BrennanMcPherson.com

We buried Henry last week. It’s probably safe to say that deep down my family didn’t want to; despite the fact he never spoke and was never seen, we enjoyed having him around. But there are some things in life you just need to let die.

Henry first appeared over the summer. I was washing the truck, got sidetracked, and ended up leaving the hose running all night. My son found the mess the next morning and wondered aloud whose fault that was.

“Oh, you know Henry. He messes up a lot of stuff around here.”

It wasn’t the first time my son walked away from me shaking his head.

To read the rest of the story, head on over to The High Calling Blog where I’m guest posting today.

Walk with me for a moment. Won’t take long, I promise. I just want to show you something.

This street here? Leads to downtown. I’m not really a downtown sort of guy, for the past few months I’ve taken my workday lunch at the coffee shop just ahead. That one, with the steaming cup of cappuccino painted on the window and the tables outside. We’ll take a table. I know it’s hot out here, but you’ll be better able to see what I’m going to show you. And the iced coffee will keep you cool. My treat. In the words of the Penny Man, “It don’t suck.”

All these cars and people? Never seen them before. That’s the way it is in the city, right? So much randomness. But mingling around in all those people are some I see each time I come here. That little lady in the pink shorts walking her toy poodle? Every day like clock-work. And that something-year-old skateboarder looking fashionably apathetic by the lamppost in front of the antique store? He’s hung out there every day for the past four weeks. See? We all have our own routines and live in our own little worlds, but they overlap sometimes. We’re not as disconnected from one another as we think.

And then there is the Penny Man. See him? No, on the other side of the street. Nice-looking guy in the suit. Yep. Comes through about this time every day. Not sure what he does for a living. Probably a lawyer or something, since the courthouse is right around the corner there. He’s why I asked you to walk down here with me. He’s what I want to show you.

Why is he the Penny Man? Don’t get ahead of me. You’ll see, just watch him. There, see that? Missed it? Don’t worry. I don’t know how many times I watched him and missed it, too. He’s good, really good. See how his hand’s in his front pocket? Now wait.

I’m guest posting today for Bonnie Gray over at Faith Barista, where you’ll find the rest of this post. Please stop on over and say hello. 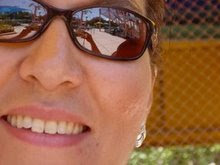 You remember Johnny Carson, right? Great guy. And funny. Millions of people couldn’t go to bed at night until after Carson. He was just that good.
But every once in a while Johnny would need a little break from the show. He had some things to take care of and new horizons to explore. So he’d call Jay Leno to come and do a show. Now everyone knew that Jay Leno was no Johnny Carson, but they put up with him, maybe even liked him, because they knew Johnny would be back the next day.
That’s sort of what I’m doing today. I’m Jay Leno, and katdish, over at Hey look, a chicken! is Johnny Carson.
My post is over there today, and I’d like you to come on over and see what I learned last week about God Work. Make sure you leave a comment so I’ll know you didn’t get lost along the way, and feel free to roam around katdish’s site. If you ever need a laugh, some social commentary, and a little random madness, she’s the lady to see.
And I’ll see you back here tomorrow.