It’s a little late for me to be getting out in the backyard.

A busy day, too much to do. My wife said not to bother but I’m here anyway. I have the hose and two bags of seed plus what’s in an old popcorn tin which came from a place I can’t remember. It doesn’t matter that it’s near dark and the birds are all but asleep. They’ll need to eat tomorrow.

As a child I spent most of the summers weeding my grandmother’s garden and watching her call the birds.

Her beckons were wordless but sung instead, each chorus unique, drawing to the telephone wire which ran parallel to her yard the robins and cardinals first, then the jays and the mockingbirds, the Bobwhites. She called the sparrows and purple martins last. The chirps and whistles from her wrinkled lips came to me as the language of angels. Perhaps it was. My grandmother loved this land and every creature upon it, but the birds presided over a loftier place in her heart. A bird’s wings carry it closer to God than any of us could ever reach. She once told me that when we are wearied and spent and our voices grow small, the birds will carry our prayers to God’s ear.

Though I’ve never quite developed my grandmother’s talent for song, I take great care of the birds in and around our wood.

They are fed and watered without prejudice. I welcome the crows and starlings as much as the mockingbirds and finches. They sing to me and help keep the bugs away. My yard is a happy place. A safe one as well, in spite of the neighbor’s cat.

My habit has always been to check the feeders and and our birdbath every few days and replenish as necessary. That has changed these last months. I’m out here most every day now to top off the thistle seed or sow a little extra food in the grass for the doves and cardinals. I will not let the suet disappear since the woodpeckers prefer it. The same holds for the jays and their sunflower seeds, or the mealworms I set out in a barren spot among the grass for the robins and bluebirds.

Even in the rain, I go. Even on those chilly May mornings when the sun is not yet over the mountains. Even now, when all that is left in the sky are the stars above me. It is no responsibility or needful thing. My birds would get along fine without me. They would have the creek to drink from and the forest across the road from which to seek their shelter and food. They do not depend upon me, though I have come to depend upon them.

My wife watches from the kitchen window. She smiles as I scrub the bath or add a few extra sunflower seeds to the small wooden church attached to an iron shepherd’s crook which serves as one of our feeders. Sometimes she’ll bring out a bowl of the previous night’s popcorn for me to spread, or the heels of a bread loaf. She’ll tap the glass and point at the sparrow near my feet, so accustomed now to my presence that it no longer deems me a threat.

I don’t believe I’ve ever told my wife what Grandma once said about the birds.

She knows the tale of the telephone wire and the way Grandma sang but not about the prayers. It seems a silly thing on the surface. The sort of story any grandparent would tell a child in order that the world be made a more magical place. Of course birds do not carry the wearied prayers of weakened souls to the Lord’s ear. They are creatures, no more. Their songs are merely speech. Their wings may take them skyward, yet they are still earthbound.

But I know as well that the woman smiling at me through the window was told not long ago that she is battling a form of leukemia. In ways I’m sure you will understand, that means I am battling it as well. We go through this dark world hand in hand with those we love. Many times, that is the only way we can get from one end of it to the other. We trust and fight and smile and believe. We pray, even in our brokenness and fear. Especially then.

That is why I am out here tonight with my buckets of seed. Why I will be here tomorrow.

Because I must feed my birds well and hope they fly higher. 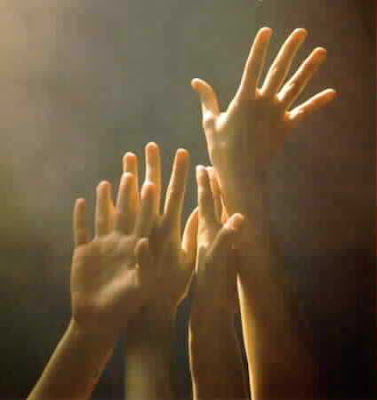 It wasn’t meant to sound racist, and I didn’t take it that way. But if you would have been walking by when she said it, it maybe would’ve sounded that way. Friends have their own private vocabulary with one another. They get away with saying things that would maybe get them in hot water if said to someone else. That’s especially true when it comes to interracial friends.

So when Rozlyn suggested to me that “White choirs can’t sing right,” I had to snort, but I didn’t take offense.

We had a great choir at church. They dressed in nice robes and stood up straight and belted out the hymns with as much gusto as I’d ever seen. They made people raise their hands and sway back and forth and break out in big, toothy smiles.

But Roz’s choir? Everybody around here talked about Roz’s choir. They didn’t just make people sway and smile. They made people dance. Whether they wanted to or not. To me, there was a big difference between swaying and dancing, and I was curious as to what that difference was. She was the one who brought up the fact that it was because her choir was full of black people and mine was full of white. I wasn’t going to touch that subject, even with her.

“Sure white choirs can sing right,” I said.

She shook her head slowly so I’d understand. “No, they can’t. Now don’t get me wrong, they can sing sure enough. Sing pretty, too. But there’s a difference between singing and singing.”

Roz shook her head again. “You gotta be the whitest white boy in the world,” she said. “Of course there’s a difference.”

“Tell you what. You come to my church Sunday night. We’re having a little praise time. You’ll see what I’m talking about.”

So I went. I had to. The curiosity was killing me.

Her church was small by today’s standards. Small but nice. Comfortable. So it was fitting that the man who greeted me at the door was also small, nice, and comfortable.

“Evenin’ to you,” he said as he handed me a bulletin. “Praise the Lord.”

“Back at’cha,” I said, which brought a chuckle and a solid thump to my back.

I took a seat about halfway up on the left side and spent the next ten minutes standing up and sitting down when folks would walk over to welcome me. A few Yes sirs and Thank you ma’ams later, out walked Roz and the rest of the choir.

Sixteen people by my count, ranging in age from sixty to somewhere in the teens. Evenly divided between men and women. Not much different than the choir at our church except for the fact that they weren’t holding sheet music.

The choir director floated behind the pulpit and led us in an opening prayer. His “Amen!” was the cue for the organist to start, the choir director to start directing, and the congregation to stand.

The organist was nearing the end of the introduction and the director began to raise his hands to signal the choir’s entrance. Roz smiled at me and winked, as if telling to me that I’d better get ready. I would have if I’d known what to get ready for.

What happened next goes well beyond what I can describe with fingers and a keyboard. You’d have to be here, with me, so you could see the expression on my face as I’d tell it. But I’ll try. When the director threw his hands down and the choir sang that first word (fittingly, that first word was “PRAISE!!”), the sound very nearly knocked me backwards into my seat. I had to grab the pew in front of me to balance myself.

The church exploded in song. Some shot their hands into the air. Others clapped. Others pointed their faces toward the ceiling while their eyes gazed beyond and into heaven itself. Tears welled in my eyes at the sound. I couldn’t move. Couldn’t clap, couldn’t raise my hands, couldn’t even breathe. Roz looked at me and smiled. Whitest white boy in the world, indeed.

This wasn’t singing. I knew that then. No, this was singing.

Afterwards, I sat in the parking lot with Roz, her husband, and their daughter.

“Lesson learned,” I told her. “That was incredible.”

“Nothing incredible about it,” she promised. “Just different.”

“Look,” she said, “you know I ain’t one of those black people all up in her history. This is my country, not somewheres in Africa, and my kin were slaves, but you ain’t got a hand in that. We’re just the same in a lot of ways, you and me. But there’s a difference. The faith you got from your momma and daddy was come by the easy way. The faith I got from mine wasn’t.

“We found faith out in the fields. Found it getting whipped and beat on and bought and sold. We hurt, you see? That’s why we can sing. Because the more you suffer, the more you have to thank God for when He leads you out of it. Our singing isn’t just praise. It’s thanks, too.”

I saw then. I understood. Roz was right. We can all sing, but only the wounded can sing truly. Only the maimed and the hurt and the bruised and broken. The best voices are those who not only have cause to praise God, but thank Him, too. And that’s good. Because this whitest white boy in the world came to Him as just that.