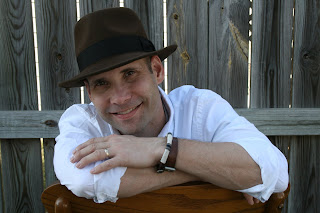 (My thanks to Tina Dee for spotlighting me on Bustles and Spurs. If you’d like to read her post, go here.)

Now, about that hat…

I come from a long line of hat-wearers, which has little to do with the fact that all the men in my family are…uh…follically challenged. My grandfather wore a hat every day of his life. Never went out the door without one. So, too, does my father, who carries on the tradition with an array of ball caps that pronounces his allegiance to everything from the University of Virginia football team to Callaway golf clubs.

Ball caps have become my choice of head garment as well, and I own many. But I have always wanted a fedora like my grandfather’s. He loved his hat. Always made a point to lambaste me for thinking my Yankee hat was the proper equivalent to his, too. “Comparing your hat to mine,” he would say, “is like comparing Tom Cruise to Gary Cooper.”

When my favorite ball cap recently began to show a little excess wear, I thought it might finally be time to buy a proper hat.

Then, after the UPS man dropped it on the porch and I tried it on, I had another thought:

Not because I didn’t like it (I did), and not because my wife did not give her approval (she did). No, it was because of the peculiar sensation I was getting that even though I was a fedora guy on the inside, maybe I wasn’t ready to be one on the outside.

Yes, I am thirty-six. And yes, peer pressure shouldn’t matter so much anymore. Yet here I am nearly twenty years out of high school, and I have yet to rid myself of the overwhelming need to fit in. Walking around all day hearing chuckles and a chorus of “Hey Indiana”? Not fitting in.

I kept the hat. I suppose I could say that I did so because I loved it and decided that meant more than what anyone else would say. That would be partly true. The other part of the truth was that returning the hat would require filling out paperwork, a trip to the UPS store, and more time than I could spare. Sad, I know. But true. Which left only one other option: I could keep the hat on the shelf in my closet, hidden away from the world, and bring it out only within the safe confines of my family.

But that didn’t sound right. I am a great pretender. Adept at not revealing those aspects of myself that run contrary to the perceived norm. The real me is masqueraded daily in elaborate costumes designed to both hide and reveal depending upon my immediate surroundings. I am rarely me in public. Not wholly, anyway.

And I’m not just talking about my love for fedoras. My desire to not cause waves, to go with the flow, extends to other things. Things like my faith.

When judgment comes and the sheep are separated, how many of the condemned will shout my name and say, “Why didn’t you tell me?”

I was about to put my hat where I often put my faith. On a shelf in the closet of my life. Visible only among those close to me, where it’s safe.

Those parts of us that we hide for fear of chuckles and snorts, whether as incongruous a the love for a hat or as serious as the faith we hold true, are us. Who we are. To live any other way is to live a lie. And I for one was tired of the costumes.

I’ve worn both my hat and my faith the same way since: out in the open, for all to see. I’m wearing them now as a matter of fact, sitting beneath the shade of an oak at work. People pass. They smile and wave and say to those with them, “Now that’s a hat.” People like my hat. And I’m glad they do.

It’s a good start, I think. But I hope it won’t end there. Maybe soon they’ll smile and wave and say to those with them, “Now that’s a Christian.”