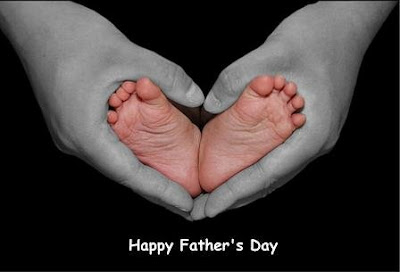 I’ve been a father for seven years now and a father of two for five, but I’ll be honest—I still have no idea what I’m doing. There is no how-to guide for fatherhood, no instruction manual that the doctor hands you just after he hands you a new child.

Yes, the Bible covers just about all we need in the way of raising children. Just about, though. But just as a lot of things were left out of the Bible that in my opinion really shouldn’t have been (what made Jesus laugh? For some reason, I really want to know that), there are a lot of things missing on how to be a dad.

Like what to do when your three-year-old daughter accidently locks herself in the bathroom and can’t figure out how to unlock the door (what I did: pull a Jack Bauer and kick the door in. Result: louder crying). Or what to do when your four-year-old son manages to shove his peanut butter and banana sandwich into the DVD player just because that’s not where it goes (what I did: “What were you thinking?” Result: “I dunno.”).

I wish the Bible was clearer on those sorts of things. I need the guidance. When it comes to fatherhood, I resemble more a turtle on its back than Ward Cleaver. Every father is like this.

For some reason the women tend to outnumber the men around here, at least as far as the comments go. I’m not really sure why that is, but I’m not going to think about it now. Now, I’m going to use that to my own advantage.

I’m not all that different than any other man, with maybe the only difference being I write down what I think rather than keeping it all inside. So on this Father’s Day weekend, I’m going to tell you what I’m thinking, and I’m going to trust that you’ll know either your father or the father of your children is feeling the same way, even if they don’t always say it.

To the daughters out there:

Yes, we’re protective. And because of that, we’re hard on you. And as much as I would like to say that we’ll change that, I can’t. We won’t. We’ll always subliminally threaten your dates, we’ll always secretly distrust your husbands, and we’ll always think that no man is worthy of your love. We are or were hard on you in high school because we remembered well what we thought about as teenagers and how often we thought about it. We’re guys, and we know guys. That’s why we won’t change. You’re just going to have to deal with it.

We know early on that the day will come when you’ll give your heart to someone else. That Daddy will at some point vacate the pole position in your heart. We know it. It kills us anyway. Because no matter how old you are, in our minds you’re still in pigtails running to greet us at the door when we get home from work.

We’re harder on you, no doubt about it. We expect more, demand more, and need more. There is nothing in the world more difficult than raising a boy to be a man, if only because our culture now demands the opposite. There are a lot of people who’d rather boys remain boys, who believe that the strong, silent types are archaic and hurtful. They’re not. They’re needed. This world needs more men, men who will both love and fight, bend to God but never man, and dedicate their lives to standing for something bigger than themselves. Our country is defined not by its politicians or schools, not by opinions, but by the sort of men who walk its streets.

And to the wives of our children:

We don’t always show it, don’t always act it, but we take being the father of your children with the utmost seriousness. We work hard to provide for you, enduring things at our jobs that you cannot know because we don’t want to bother you with it. Yes, we know we should. But we also know that home is our haven, the one place where we can leave the world we hate for the world we love.

We’re quiet sometimes around our children. Withdrawn. We don’t mean to be. It’s just that they have managed to conjure within us a love we thought impossible, one that has taken us utterly by surprise. It’s a breathtaking love, what we feel for our children. And also frightening. Because we know what the world is like, we know what shadows lurk, and we know we are the ones responsible for keeping those shadows at bay.

Deep down, whether you know it or not, all we want is to be your knight. The one who protects you and our children, the one you feel safe with. All we do in life revolves around that one thought.

We want to be needed.

To be your hero.

To us, little else matters.