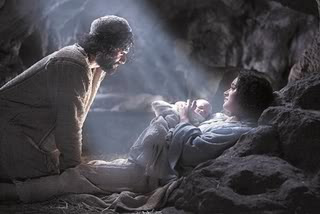 Name’s Joseph. Joseph who, you ask? Joseph of Nazareth. Jesus’s Pop. The other father. No, no. That’s okay. No offense taken. I’m used to kind of being the guy in the corner, the mystery man. I don’t mind, though. Promise.

I just wanted to tell everybody Merry Christmas, and thought this would be the best way to do it. Computers. Who could have dreamed that one up back in my day? It would have seemed impossible. But I’ve seen plenty of the impossible. Nothing much surprised me after that night.

Everybody considers Santa to be the father of Christmas, but I guess I could share that title. Which is funny, because I tend to be left out of things. The focus is on Jesus, as it should be, and then Mary. Angels. Shepherds. Wise men. There’s a lot going on in the Christmas story. But me, I’m just the guy standing beside the manger in the Nativity scene. Not a lot of people understand my side of the story. Which is another reason why I’m here.

Christmas is a lot of things to a lot of people. For many, it’s the greatest time of the year. It’s a time for joy and togetherness, for peace and love. For some, though, Christmas isn’t what it should be. It can be lonely and depressing and scary. I knew both sides of Christmas on that night. I knew both the magic and the hardship.

You have to remember, Mary and I were far from home. Bethlehem is about seventy miles from Nazareth. The going wasn’t easy, especially for her. There she was, nine months pregnant and having to ride a donkey all that way. We slept on the hard ground and had to deal with the weather. It was tough. And to make matters worse, we were travelling that far just to get taxed.

Then, once we got there, we find that there’s so many people that all the rooms are full. So it’s out to the stables for us. Let me tell you, that wasn’t easy for me to bear. I’m supposed to provide for my family, right? But instead of me being able to get Mary a room, my pregnant wife has to sleep with the cows and the horses.

No, that first Christmas wasn’t easy at all. Not for me. I was just a carpenter, remember? And to hear some folks, I wasn’t even a very good one. I was just a man, just like any other. Yet an angel told me that the woman I loved was carrying God in her belly, our whole town was saying some Roman soldier was really the one who got her pregnant, and we were both weeks from home, tired and hungry and scared, having to spend the night in a barn. Doesn’t sound like the scene on the front of your Christmas cards, does it?

So yes, I know this time of year can be tough. I know it can magnify the loneliness and fear that a person feels. But trust me on this: hidden behind all that loneliness and fear is the very same miracle that I saw that night. The real Christmas magic. Because when I held the Child, that fear and loneliness left me. Everything Mary and I had to endure seemed meaningless and small. The only thing that mattered was Him.

That’s what I want to tell you. Whether these days find you well or sick, hopeful or fearful, whole or torn, He is what matters. Look at the Babe in the manger, and you will see everything differently from then on.

Merry Christmas to you all.