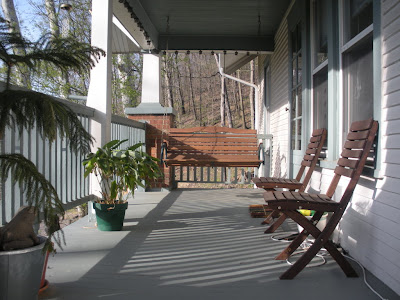 I said, “You know Davey, this is why Southerners are stereotyped.”
“Don’t know nothin’ about that,” he answered, “just know I gotta clean this. Gettin’ dark, you know.”
I looked at the sunshine splayed over his front yard and still didn’t know what Davey meant by that. So I said, “Just heard a song on the radio that pretty much summed up what you’re trying to do here.”
“Well, if that song was about some guy sittin’ on his porch cleanin’ his shotgun, then I’d say it’s spot on.”
I nodded and said nothing because there wasn’t anything else to say. So I just sat in the rocking chair beside him and watched his grass grow.
In the country a person learns to decipher the hidden meanings found in the common wave. There are many. Depending upon the angle of the arm and the length of the waggle, a gesture by people from their porch can mean anything from “Stop on in and sit a spell” to “If you don’t keep moving, I’m going to shoot you.”

That’s why when I passed Davey Robinson’s house and observed the angle and the waggle of his wave, I stopped. The invite was there, even if the words weren’t.

I climbed onto Davey’s porch and saw the oil and the rags next to his shotgun. Not an uncommon sight in these parts. We take the second amendment with the utmost seriousness. When I asked what he was doing, Davey simply said, “It’s gettin’ dark.”

Davey’s wife poked her head out of the screen door just then. “Hey, Billy,” she said.

She looked at her husband. “Davey, this is the last time I’m going to tell you. Put that stuff away.”

“What’s Caitlyn up to?” I asked them.

Davey said nothing. Rachel, however, did: “It’s prom night.”

I looked at Davey and smiled. “You’re actually cleaning your gun for Caitlyn’s prom?”

Rachel rolled her eyes and went back inside, leaving the two of us alone on the porch.

“Caitlyn’s going to prom, huh?” I asked. “Seems like just a few months ago she was still running around here in pigtails.”

“Don’t I know it,” Davey said, running a cloth through the barrel. “I enjoyed every minute of it, too. Guess growin’ up was bound to happen sooner or later, though. This prom thing has been goin’ through her mind for months. Wasn’t much I could do about it.”

“Guy named Kevin. She’s had him over a few times. Seems like a good enough kid.”

“If he’s a good enough kid,” I said, “then why are you out here sittin’ on the porch with your shotgun? I’m sure they’ll be fine.”

Davey paused with his rag and said, “Fine, huh? Tell me, what sorts of stuff were you thinking about all the time when you were sixteen?”

I thought about that, then said, “Maybe you’d better load that thing.”

“That’s what I thought.”

Caitlyn came onto the porch just then. Her blue dress shimmered in the sunlight, and Rachel had done her hair up into a bun. I understood then why Davey was so nervous. Caitlyn had always been a pretty girl, but right then she looked almost stunning.

I had to be delicate here. I couldn’t well gush and say too much, not with her father sitting beside me with a shotgun in his lap. But if I said too little, Davey might shoot me anyway.

“You’re easy on the eyes, Miss Caitlyn,” I said. Davey nodded out of the corner of my eyes, and I let out a happy sigh.

“I don’t know what that means,” Caitlyn told him, “but please put that thing down before Kevin gets here. For me, Daddy.”

Kevin pulled up in his parents’ car a few minutes later. He was nervous when he saw Davey and me on the porch. He was more nervous when he saw Caitlyn. By the time the two of them had posed for a dozen pictures for Rachel and left, Kevin had nearly sweat through his tux.

Davey and I watched as they pulled away.

“You know,” he said, “I used to come out here on this porch every evening and call that youngin’ in. ‘Gettin’ dark!’ I’d tell her. Now here she is, going out in that dark. And I can’t call her in. Not anymore. She’s gettin’ older. Becoming a woman.”

“But I know this,” he said. “She’ll always be my little girl. And I’ll always be waitin’ here on the porch until she comes home.”

Hey folks, Katdish is running an oldie but a goodie of mine over at Hey Look, A Chicken! today. Wanna stop on over and take a look? Hope so. So follow me…