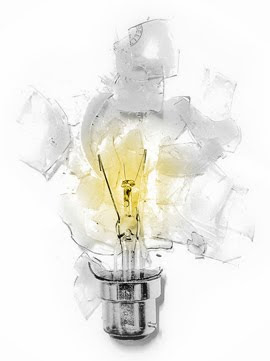 One of the tenets of redneck folklore is the belief that people die in threes. It’s a tenet so ingrained around here that there is an influx of patients to the doctor’s office whenever a longstanding member of the community passes on. No one knows who will be next, and they don’t want to take any chances.

I’m not sure how much truth there is in that conviction. People might die in twos or fours just as often as threes. But I do know this—light bulbs die in threes. At least in my house.

It began last week with the light in my son’s bedroom, which much have died a quiet and peaceful death sometime in the night. He rose out of bed the next morning, flipped the switch, and…nothing. A few days later it was the light above the kitchen sink, which yelped a pop! when my wife tried to turn it on.

Then last night I came upstairs to my computer and fumbled for the light switch behind the door. Just as I flicked the switch upward, blue and white sparks sprayed from the ceiling fan in a burst of violence that actually managed to shatter the light bulb itself. It was quite impressive.

What brought about this light bulb mass suicide is beyond me. Our home is not old and the wiring was expertly done. I can only surmise that everything has its life cycle. At some point the odds are in favor of more than one sputtering out at the same time.

The blown light bulb is an exercise in both physics and inevitability. The cause is fairly straightforward: a light bulb’s filament does not evaporate evenly, leaving it to develop spots over time that are thinner than others. Since the electrical current heats the filament evenly, the thin spots heat more quickly. The result is a pop! and then darkness.

What struck me as I stood there staring at the bulb was my reaction, which so happened to be the one my son and my wife had, too. Not anger or frustration. Not even disappointment.

Because a light is supposed to turn on when you flip the switch it’s connected to. I had a vast amount of experience to back that assertion. It was one of the few of my life’s givens, so much so that I’d perform the act without giving it a second thought. Flipping a light switch is faith at its purest, the embodiment of if-I-do-this-then-this-will-happen.

It’s easy to take such things for granted, though. I’ve spent my day keeping track of every light I turned on, from the bathroom light when I first got up to the light in my office nearly sixteen hours later. My total thus far? Thirty. I’ve turned thirty lights on today, and none of them has broken.

So maybe I needed the gentle reminder that all those everyday things I put my faith in are neither permanent nor flawless. Things that go well beyond light bulbs and into the very center of my life. The job I have today may go pop! tomorrow. The savings account to cushion a fall may be pulled from beneath me just before I land. And the very ones I love most may be the very ones who let me down the hardest.

That’s the nature of life, the consequence of living in a world that isn’t quite what it should have been. We’re all searching for something to hold onto, something that will give us a sense of security and knowing, and yet everything we have is like that light bulb—at some time and in some way, they will all fail in an impressive fashion and leave us standing in the darkness. Which is all the more reason to place more trust in God than man.

Our hearts are pocked with the scars of failed faith and broken trust. There’s nothing we can do about that. Disappointment is built into this world. But despite the fact that those light bulbs in our lives will shatter and explode from time to time, we still must flip their switches. We still must believe. That’s what life is. What Love is, too.