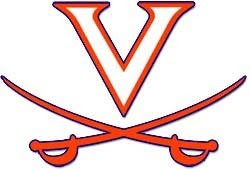 “Excuse me,” said a voice from behind.

I closed the magazine that had been keeping me company in the checkout line. Gossip magazines, I thought, were printed exclusively for such occasions. What better way to wait on Judy the cashier to work her way to you than gawk at the trials and tribulations of the better off? It makes you happy to be poor and unknown.

I turned to face an elderly woman and her two grandchildren, all of whom were smiling. At me.

I looked down at my T shirt. White and frayed, with a white V outlined in orange above two crossed sabers. The logo of the University of Virginia. Where, I assumed, this nice lady thought I was getting some higher education.

I had to smile at that. Me? The University of Virginia? No. UVA rests in the middle of Charlottesville, Virginia, home of the Beautiful People. People who drive Ferraris and live in houses bigger than my church.

I, on the other hand, rest in the middle of the Shenandoah Valley, home of the regular people. People who drive Chevy trucks and live in homes rather than houses.

I have been called regular often. Beautiful never.

And I suppose that bothered me on some level. That deep down I was tired of being Levi Strauss regular and wanted to be Ralph Lauren beautiful. Just once, just for a moment. Because before I knew what I was doing I said, “I’m a senior.”

“Really?” she beamed. “My grandson is a senior! You may know him—”

“—No,” I interrupted, suddenly uncomfortable, “probably not. Big campus and all.”

She nodded. “What do you study?”

“Architecture,” I answered, figuring that if I was going to lie, I might as well lie like George Costanza.

I wasn’t sure if UVA actually had an architecture program, but it seemed pretty Ralph Lauren. And I wasn’t sure if she knew either, but she said, “Wonderful! Do you have any job prospects.”

“Oh, sure,” I said. “You know, New York, Miami, Chicago…” I ran out of cities and finished with, “Just trying to figure out which is the best fit.”

“Well,” she said, “I’m sure you’ll decide. The best fit is always the best choice.”

The line cleared in front of me and we offered our goodbyes. She wished me luck and gave me a knowing wink. One that said I didn’t really need any luck. I was a Beautiful Person. I was already lucky.

We met again on our way out of the store. I watched as she gathered her two Baby Gap grandchildren into her spiffy new Mercedes and drove away. Into the sunset, appropriately.

And me, I trudged to my truck and drove in the opposite direction, back to the dirt roads and regular folks. The ones who lived not by hedge funds and fancy cars, but with one hand to the plow and the other raised to God.

I drove and thought about what I had just done. I lied to an old lady. That’s pretty bad. But I had lied about myself, and that was worse. Still, pretending to have a life of filet mignon and Cristal was a nice switch from the reality of cheeseburgers and Coke.

But as I drove from the city to my small town, I thought maybe not. There, nestled in the shadow of the Blue Ridge, were people much like me. Hardworking, kind, and simple. Displaying a quiet strength that was both easily overlooked and a force to be reckoned with. We cared for our own, flew our flags, and minded our manners. And we might not have had much in the way of worldly goods, but we had plenty in the things that mattered.

Charlottesville may have been the home of the Beautiful People, but we had our share, too.

What was it the grandma in the checkout line had said?

“The best fit is always the best choice.”

And I knew that I had made the best choice. Because I would always fit in with those who had one hand to the plow and the other raised to God.

And I would rather be blessed than lucky.