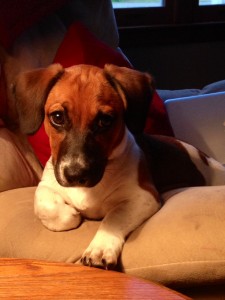 I’m pretty sure the man down the street is losing his mind.

Let’s be honest, we’re all probably doing the same thing at this point in one way or another. But this guy is turning a special kind of crazy, to the point where I’m starting to worry about him.

His descent from Buttoned-Down Businessman to Something Completely Other is something I can’t seem to avoid, since his house sits on my daily walking route. I’ve walked more in the last six weeks than I probably did in the last six years. Our dog has gone from wagging her tail and yelping with joy every time I grab the leash to curling up in the corner and uttering a kind of not-this-again moan each time I tell her we’re taking yet another jaunt through the neighborhood. But it’s healthy and it gets us out, and everybody says that sunshine doesn’t just help beat back the invisible scourge, it helps beat back the blues as well.

Our route generally begins with a left out of our driveway and a straight shot about a quarter of a mile, where pavement yields to gravel and then a dirt trail leading into the woods. Our dog Lucy always heads there first. Like she’s telling me that if I’m going to drag her two and a half miles down one street and another, she’s going to get her fill of the woods first. And I always oblige her, because I like me some woods too. The problem — if I can call it that — is the man’s house sits right near the end of the street where the trail sits, meaning I get to watch him just about every day.

It began innocently enough. After all, I don’t think anyone goes crazy all at once.

It’s more a gradual thing, nice and easy and bit by bit until maybe it’s too late to turn back. I don’t know many of his particulars. Not his name (there’s just a number on his mailbox), or what he does for a living (though it’s a suit-and-briefcase kind of job; there were mornings before the quarantine when I would see him dashing from his door wearing one and carrying the other), or how much he makes (plenty, given that fancy car he drives). He does have a wife and at least one child. I’ve seen both, and first impressions told me they weren’t nearly as high strung as he seemed to be.

Like most everyone else, he’s either working from home or home and not working. Being stuck where you are in the midst of so much uncertainty tends to weigh on the mind and the heart. Tends to make us a little jittery sometimes. We’re all dealing with this as best we can. That’s what I told myself a few weeks ago when I passed by his house on my afternoon walk with Lucy and saw him lying in his front yard. I didn’t know what bothered me most as I passed, whether it was the fact that here was a grown man splayed out on his grass and staring at the clouds, or the fact that he was wearing a faded pair of jeans and a plain T shirt. It just didn’t seem to fit the picture I’d always had of him, you know? Like seeing a polka-dotted elephant.

Two days later he was out there again, this time in one of the rocking chairs on his porch. Different jeans and different shirt (both of them a little more ragged than before). Feet kicked up onto the railing. Glass of tea on the table beside. His jaw held a thin layer of scruff, and his hair had gotten long enough to touch the tops of his ears. I noticed some gray in there as well — the Food Lion was running out of everything at that point, and I figured that included Just for Men.

And you know what he did? He waved. At me.

I don’t think I can overstate the shock I felt. Even the dog looked at me like one more thing in the world had just fundamentally shifted. I was so thrown off guard that I don’t even remember if I waved back.

He was back the following Thursday. We heard him before we saw him. His garage door was open to catch an unusually warm April sun. Lucy pinned her ears back on her head as the first chords to Poison’s “Nothin’ but a Good Time” blared from somewhere inside. He didn’t wave that day. Too preoccupied, I guess. What with him playing air guitar and all. Seriously.

I’ll be honest — it all preyed on my mind. Lucy and I started taking our walks with the singular purpose of strolling past his house. Forget the sunshine. Forget the woods. I just wanted to see what that guy was doing, see how far he had fallen. Terrible, I know. I equated it with driving past a car accident and just having to look, if only to tell myself,

“Things might not be great, but at least I’m not that guy.”

Then came yesterday. Me and Lucy and a bag filled with her daily deposit, out enjoying the warmth. Mountains? Clear as a bell. Sky? Empty. Streets? Quiet. Crazy man down the road? Crawling around his front yard. Literally.

At this point, Lucy was just as interested in him as me. She held him up as just another example of how humans are bumbling idiots and only dogs can truly save the world. We slowed as he inched along on his belly, aiming for a rabbit munching on a bit of grass near a maple tree. There the both of us stood, watching him watch it. Lucy’s growl chased the rabbit around the house.

The man looked at us and shook his head, grinning like a kid on Christmas, and what he said convinced me that everything I’d thought about his mental state was dead on:

I said sure, thinking it was just a rabbit. This guy gets worked up over a rabbit? Has he never seen a rabbit before? What’s he going to do when he sees a coyote out here? Or a bear?

“Sure,” I said. “You know, just waiting for things to get back to where they were.”

Steve shook his head then in that slow sad way that you often see parents do with their young children. “I keep hearing people say that,” he said. “But not me. No. Way. I don’t want to get back there to the before. Back there sucked. Why does anybody want to go back when we got this gift?”

I was sure then: nuts. Certifiably nuts.

I shook my head.

I wanted to ask if the rabbit had told him that but didn’t.

I didn’t, not really. But as we said our goodbyes and Lucy and I left him lying in the grass and looking at the clouds again, I got to wondering. We’re all trying to get through this moment in our lives the best way we can. For some, it’s filled with fear and grief. For others, a kind of numbness. But for those like Steve, there is hope to be found even in so dark a time.

Happiness, even. Even joy. You just have to look for it.

If I’m honest, there were things in my life that I didn’t much like back before the world went wonky. Things I wished I would have done differently, things about me that I always wanted to change. We always seem to settle, don’t we? Always aim for just good enough. Always want to just go back.

But I’m wondering even more which of us is really the crazy one.