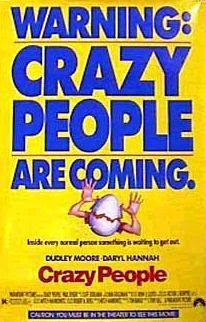 The thing about shopping isn’t the money you have to spend. I don’t mind spending money. And it isn’t the crowded streets and the even more crowded stores, both of which I tolerate when I must.

No, the thing about shopping is the crazy people you parade in front of you all day long.

And yet there I stood on a recent Saturday morning in a busy local store, surrounded by crazy people.

Like the woman who wanted to return the underwear she had purchased the week before. The underwear that she had not only worn, but was wearing at that moment. “I have the receipt right here,” she told the woman at the service desk. “I just need to borrow your dressing room.”

Or the twenty-something man who stood for twenty minutes in the checkout line begging the cashier to run his credit card through just once more, as if God would suddenly smile upon him with fifty magical dollars to pay for his beer and smokes.

Or the elderly man who launched into a tirade against the store manager over the hidden consortium of powerful businessmen conspiring to prevent him from finding his favorite brand of peanut butter.

I paced through the store as warily as I could, careful not to touch anyone for fear that I would catch the Loony virus. If I would have had one of those H1N1 masks, I would have put it on. I felt as if Rod Serling would at any moment step in front of me and start speaking of another dimension of sound and sight and mind.

But it was as I left the store when I saw maybe the craziest person of all. Stepping like a tightrope walker on the thin line where the concrete of the storefront met the pavement of the parking lot. Bushy-haired and dirty, hands waving both outward and upward. Shouting.

What he was shouting was difficult to decipher, though “Why did I do that?!” could be made out quite plainly. I could pick out questions that were both asked and answered and as he seemed to analyze the results of something that had happened concerning someone named Harry.

Many of the customers entering the store altered their gait so as to time their arrival just before or just after he had passed. The ones stuck in no man’s land could not escape his approached and offered a variety of reactions. A few looked away to something, anything, that they could deem very interesting. Others studied their feet. More than a few tensed for a possible confrontation.

One young boy with his father in tow voiced the question we were all wondering.

“Don’t look at him,” his father answered, “he’s just crazy.”

Crazy Man walked passed me (“Why did I do that?!”) toward the far end of the parking lot. The rest of us looked after him. Some, like me, were certain he had missed a pill or two that morning. Others, also like me, were wary that he’d decide to return.

I tossed the experience into my mental It Takes All Kinds file and forgot about it, but only for a minute. I couldn’t stop thinking about what that father had said to his son.

But then I began to wonder.

In a word, none. And it wasn’t because I didn’t have reason enough to do so. I had plenty. My days were filled with irrational acts and suspicious thoughts. Maybe taking the time to ponder the reasons behind the actions would help to fix that. Maybe a little self-examination would go a long way in turning the person I am into the person I should be.

We talk to our spouses and our co-workers, our children and our friends. We talk to strangers and pets and God.

But most of us haven’t heard from ourselves in a very long time.

And maybe, just maybe, that makes us the crazy ones.