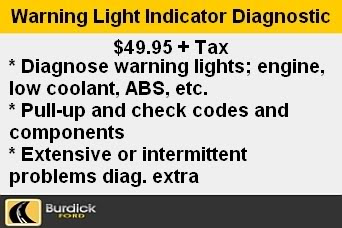 It began like most problems do—small and sudden. One a drive down an empty two-lane road with windows open, stereo blaring, and me doing my best Kenny Chesney impersonation. Work was done, home was ahead, and I had raw meat, a hot grill, and a ballgame to look forward to. Yes, life was good.

But then a county police car rounded the curve ahead of me and I spotted the tell-tale radar jutting out from the driver’s side window. And whether you’re doing a hundred or twenty-five, your first reaction when you see such a sight is to slow down and check your speedometer. I did and did.

The good news was that I wasn’t speeding (much).

The bad news was that a red light was glowing on my dashboard.

I raised my sunglasses and squinted, hoping that the light was not a light at all. Maybe it was a reflection of the sun or a peculiar shadow. Maybe I was just seeing things.

I tapped the glass while keeping an eye on the road, but the light wouldn’t turn off. So I took the next logical step—I put my sunglasses back on, turned Kenny Chesney back up, and kept driving. Not simply so I could watch the road, but because I was trying to convince myself that if I wasn’t looking at the light, it wouldn’t be on.

The modern motor vehicle is a technological wonder that can give you detailed information about a myriad of mechanical functions, but it cannot communicate more vaguely than CHECK ENGINE. Those two words of detached brevity can mean anything from a loose gas cap to a blown head gasket to nearly everything in between. So when I got home I paused to unscrew the gas cap, tighten it again, and restart my truck.

I opened up a dusty filing cabinet in my head and ran through a list of possible causes: sticky EGR valve, pinched fuel injector, faulty oxygen sensor…

All of which required a trip to the local repair shop, about two hours of my time, and more than a few bucks to diagnose and fix. And even though the guys down at Eavers Tire are great to hang around and talk with, I could think of a few better ways to spend a Saturday morning.

So that’s where things stand as of now. I’m still driving my truck, and it will still clear it’s voice with a low chime and announce CHECK ENGINE every time I turn the ignition. And for the past two days it has even resorted to blinking at me. “Hellloo,” it mimes, “pay attention to me!”

But I don’t. Yesterday I resorted to covering that tiny part of my instrument panel with duct tape so I wouldn’t have to see it anymore. That didn’t work, either. I couldn’t see the light but I still saw the duct tape, and I knew why it was there.

A part of me still thinks the light will go away if I ignore it long enough. I should know better, yes. This isn’t the first time I’ve had to battle warning lights, and not just with my truck. With my life, too.

Like when I find myself choosing to stand in the rain rather than go looking for some sun. Or when my gaze begins to wander down instead of up. When I go for a bit without smiling or a long time without laughing. That’s when I know something’s wrong with my engine.

And I should. Really. But I often don’t. That sort of thing would be much like taking my truck into the shop—it would cost too much and take too much time. So I stumble on ignoring the fact that something somewhere inside me has tripped an alarm.

When paying no heed to that warning turns CHECK HEART into CHECKHEARTCHECKHEART, I’ll use a little duct tape on my soul, too. I’ll start thinking that the cure for my blues could be as simple as a movie night or a pint of Starbucks ice cream. Sometimes both.

Both peel off eventually.