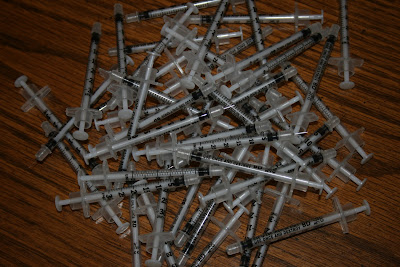 The syringes you see here constitute approximately three days worth of insulin injections for my seven-year-old daughter, who was diagnosed with Type I diabetes three years ago.
If you’ve been around here for a while, you’ve likely been party to my frustrations and anxieties over being powerless against the disease that takes a daily toll not only on her, but my entire family. For me, those frustrations and anxieties have upon more than one occasion carried over from the physical world to the spiritual one. For her, that’s never really been an issue.
Until the other day. Until she was told by a man of God that she suffered from her disease because she didn’t have enough faith for God to rid her of it.
To read about what happened, jump on over to Katdish’s blog. It was a tough story to write, but worth the effort.