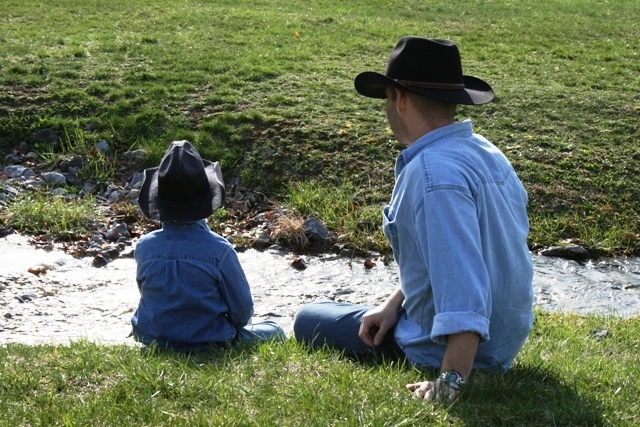 My kids tell me they’d rather be growing up when I did.

Trade 2017 for, say, 1978. Anything with a “19” as the first two numbers will do. I’m certain the bulk of their evidence for this conclusion can be handed to the stories I tell about how life was once lived in our little town, which isn’t little so much anymore. “Back in the day,” as some would put it. Or, as I’m apt to say, “When things were right.”

Like how during the summer you might go all day without seeing your parents and your parents were fine with that, because they knew you were safe and you’d be home either when you got hungry or when the streetlights came on.

Or how you’d just keep your hand raised above the steering wheel when you drove down Main Street because everybody knew everybody else. You either went to school with them or went to church with them or were kin to them through blood or marriage.

How there was Cohron’s Hardware right across from Reid’s mechanic shop, and if you were a kid and knew your manners you get a free piece of Bazooka! gum at the former and a free Co’Cola in a genuine glass bottle that was so cold it puckered your lips at the other.

How, back then, you rode your bike down to the 7-11 to play video games—Eight-ball Deluxe on the pinball and Defender and RBI Baseball—and then pool what money you had left for a Slurpee and a pack of Topps baseball cards.

How maybe in the afternoons there’d still be change enough in your pocket to buy a Dilly bar from the hippie who drove the ice cream truck around the neighborhood. You’d hurry up and eat before the sun could melt it away and then head over for pickup games at the sandlot which rivaled any Game 7 of any World Series, and after, once all the playing was done and the arguing finished, you’d have the best drink of water in your life out of Mr. Snyder’s garden hose.

Evenings were for supper and bowls of ice cream fresh from the machine your daddy spent and hour cranking on the porch. You spent the nights catching lightning bugs and lying in bed slicked with sweat because there was only that one fan in the hallway. You’d go to sleep listening to the lonely mockingbird singing through the open window from the maple in the backyard.

So, yeah. I get it when my kids say that’s the life they want. Who wouldn’t want a childhood like that?

Truth be known, I spend a lot of time thinking about how I’d like to grow up back then again, too. Not so much to right certain wrongs (I have none, other than the day when I was six that I crushed a frog with a cinderblock just to see what it’d look like), but just to go back. To feel that sense of freedom again, and safety, and to know the world as wide and beautiful instead of small and scary.

I’ve talked to others over the years who feel the same way. Some grew up with me in this tiny corner of the Virginia mountains. Many more did not. They were born elsewhere in towns and cities both, yet each carry a story not unlike my own as one would a flame in the darkness. Even many who suffered horrible childhoods look back over them with a sense of fondness. They tell me things like, “Those were some good years, weren’t they?” Even when they weren’t.

This is part of what it means to be human, I think. We spent the first years of our lives wanting nothing more than to get away from where we are, only to spend the rest of it trying to get back.

My kids will be the same way. Yours, too. They will grow and flourish and have kids of their own, and those kids will be regaled with tales of how much better the world was back in the day. When things were right.

It’s only been in these last few years that my own parents have begun telling me the truth about my golden childhood. How they often struggled to keep a roof over my head and food on my table and clothes on my back. How it seemed like the country was on the cusp of some great abyss. People at each other’s throats. War looming. Nuclear missiles. How it was hard to tell the truth from the lies. Sound familiar?

My parents don’t look back on that time with fondness at all. To them, it was their childhood world of the 50s that was back in the day. That was when everything was right.

I’m sure my grandparents would disagree if they were yet here.

There were no good old days. I think we all know that deep down.

But that doesn’t stop us from believing there were, from wanting so desperately to know that one lie a truth in its own right. Because that’s part of what it means to be human, too. Maybe the best part. That deep longing and need for a time when things are right.

There are some among us who believe that will never be the case. Things were never right and never will be. I’m not one of them. Sure, deep down I know that my childhood wasn’t always the bright summer day I remember it to be now. But on some distant tomorrow? Well.

I’ve heard that heaven will be made up of all those secret longings we carry through our lives. I hope that’s true. Because if it is, I can take comfort in the fact that I’ll be spending eternity on a quiet street in a quiet town in a quiet corner of Virginia. I’ll be listening to mockingbirds and playing a pickup game of baseball and drinking from a water hose.

That’s all I want. Nothing more.