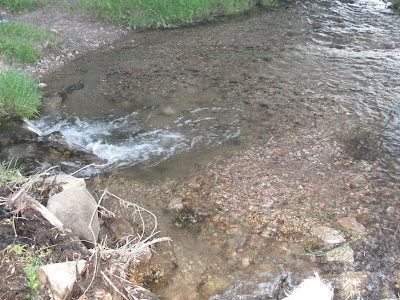 Nothing says father/son bonding time quite like throwing stuff into a creek. Rocks, leaves, twigs, dirt, leftover acorns, whatever. There are few restrictions. So long as God made it and people didn’t, it’s considered current fodder.

We’re men, my son and I. And even at his young age, he feels the same male tendencies as his father. Which means that any talk, no matter how serious, must be done under the cover of some activity that will dull the sneaky suspicion that something is being shared.

Men are generally fickle when it comes to sharing. Tools and trucks are one thing. Thoughts and feelings are quite another. The former will be doled out to any and all, but the latter is reserved for only those closest to us. And then only maybe.

My son lifts a rock the size of a softball and heaves it into the water. The resulting splash covered the bottoms of our jeans and most of the wildflowers on the opposite side.

With bellies full of dinner and the sun yawning over the mountains, this is the time of day when a certain amount of reflection is in order.

“I dunno,” he answers, this time dropping a handful of pebbles into the water, giving the sound of a miniature machine gun.

“Dunno,” he says again, now plopping a twig into the current and marveling as it gets marooned in a small whirlpool.

Like I said, thoughts and feelings are not the normal male’s strong suit. Better to throw stuff and make big splashes.

Then, just as I’m about to toss another rock as well, he says, “Daddy, what’s a good day?”

What’s a good day? What kind of a question is that?

Then again, when you’re four years old and enjoying a lazy summer of sleeping in, eating sno-cones, and throwing stuff in the creek, it’s easy to misplace the notion of what makes a good day. Because that’s what every day is.

Grow up, however, and that all changes. There are bad days aplenty. Sure, there are some who say every sunrise is cause for celebration. Every day is a good day. And to them I say bull. I’ve had some truly awful days in my life, and having the knowledge that I was alive to face them did nothing to make things better.

Still, whether a day is good or bad is not just a matter of whim and circumstance. Certain ingredients are necessary. Ingredients we must add in equal portion and in a timely manner that determine whether our days rise or fall.

“Stuff,” he says, crouching down to stare at the minnows.

“I watched cartoons until mommy said to play, then I played until I tripped over my Buzz Lightyear. That hurt. I cried a little.”

“Then mommy said to clean my room, so I did. It was a mess, daddy. And then I helped her snap the beans. Then we ate lunch, and I said the prayer. And then I took a nap. Did that mean I had a good day?”

I think about that while we toss more rocks into the water.

We believe that a day is good as long as it’s filled with more excellence than failure. Lots of sunshine, little rain. But I don’t think so. I think a good day is one that achieves a certain balance, one that allows us to see as big a glimpse of life as we can get in twenty-four hours.

A balance like laughing at cartoons and crying over a stubbed toe. Because seeing the joy in life doesn’t always mean avoiding the pain. Sometimes it means crying first and laughing second.

It can be a balance like playing hard and resting easy.

And both acting and praying.

Balance. Yes. That’s what makes a good day. Which I guess places most of the responsibility on our shoulders, because in the end our lives depend much more upon what we do than what is done to us.

He tosses one more rock into the creek and looks at me for approval.