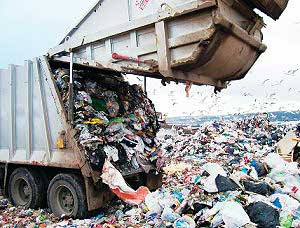 I rarely indulge myself in fanciful flights of What Should Be But Isn’t. As in, I should be a writer with a cabin in the woods rather than a mailman with a house in the suburbs. And truth be told, I rarely sit around and gripe about my work. But it does happen from time to time. And when it does, I always cure it by taking a Friday off to watch Buster Graham work.

It doesn’t take much preparation to do this. I don’t have to go anywhere. All I have to do is grab a cup of coffee and take a seat on the front porch.

Buster comes to me, you see. Every Friday around 8:30 a.m. You can hear him before you see him, courtesy of the old diesel engine grinding up the slight grade toward my street. Start, stop, and start again, with each pause taking thirty seconds.

Buster picks up my garbage. Well, Buster and two other guys. But Buster does most of the work. The other two are what he calls his audience. They’re lucky guys in my opinion. I’d gladly pick up trash if it meant I got to see Buster do his thing every day.

The first time I witnessed Buster’s act was purely by accident. I’d taken the day off to get some things done in the yard, which just so happened to coincide with my trash getting picked up. It was an astonishing, almost magical moment that went like this:

Truck pulls up, Buster jumps off. Buster takes two steps and turns, scooping up my two barrels in a mystical, aikido-like move, dumping both in one motion. He then rights both cans so as to return them to their previous spot beside the mailbox. But he doesn’t just place them there. Not Buster. No, Buster spins them. From five feet away. One clockwise and the other counter, as if both trash barrels are entwined in some sort of exotic mating ritual.

There’s a word for what I saw Buster do that day: Sprezzatura. “A certain nonchalance, so as to conceal all art and make whatever one does or says appear to be without effort and almost without any thought about it.” Coined by a man named Baldassare Castiglione in The Book of the Courtier in 1528. Brought to life by a man named Buster Graham in faded blue jeans and a T- shirt in 2009.

I took the next Friday off as well. Just to talk to him. Just to ask him how he does what he does. His answer surprised me.

“Jesus wants me to empty the trash,” he said, spitting a brown stream of Beechnut chewing tobacco onto the pavement. “He would have been a trashman, I think. If’n He’d have been around now, that is. Trashmen do a lot of good. The world’s a mess, and we gotta clean it up.”

I’d never thought about Jesus being a trashman. (Buster also said that Jesus would eat at the Waffle House. Because the food’s good there, and that’s where all the common folk eat. I can’t argue with that). The notion of Christ emptying my garbage is a little unsettling. It seems so beneath Him. Would God do that? Maybe. After all, He washed the disciples feet. I imagine that would be a little unsettling, too.

But there’s more to Buster than his graceful emptying of my trash. It’s his attitude. If there is anyone who could rightly feel their job is meaningless, it’s a trashman. Spending all day tossing spoiled food and dirty diapers around is bound to be depressing. But Buster isn’t depressed. To him, his job has a holy purpose. He’s cleaning up the mess.

It doesn’t matter what job we have, there’s always a mess. It’s the consequence of living in a fallen world. And as Christians it’s our job to clean the messes up, whether it’s saving a soul or lending an ear or doing a little extra for someone. Or even picking up the trash.In Buster’s eyes, he’s not just a trashman. He’s a holy warrior doing God’s work. I think we should all feel the same, regardless of our occupations.