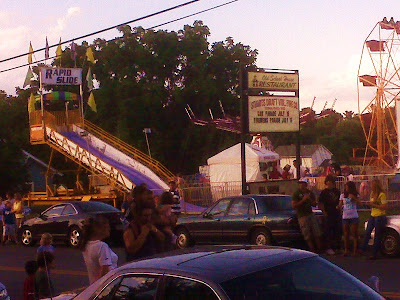 Nothing cured the torpid state of a small town quite like a carnival, and our small town was no different. It was the event of the summer here, one that is part high school reunion, part gossip convention, and all fun.

Every year a few hundred souls gathered for three nights in the parking lot of the Old Schoolhouse Restaurant to ride and play and eat, knowing that much of the proceeds will go to the local fire department.

Ahead of me were the rides. The slide and the Ferris wheel and the swings and a jumble of semi-legit games of carnie skill. Behind me, around the corner, were fire truck hangars filled with hungry people searching for dinner in the form of barbecued chicken.

I was appropriately between the two, straddling the same line at the carnival that I tended to straddle in life, the one between play-and-scream and rest-and-gawk. It was a precarious spot, and I often tried to play both sides. Which is why I was both nodding in agreement with the man beside me who says people really should grow up and licking cotton candy off the corner of my mouth.

To me, the carnival was all about catching up and touching base. There were people I see only at the carnival, mountain folk who somehow summoned the strength to come down from the hills and partake in some revelry. But they never lingered. Town life was too close to city life for their comfort.

To my kids, though, the carnival was all about the rides. And there were plenty of rides. Slides and swings. Tea cups and moonwalks. And the granddaddy of them all, the Ferris wheel. Both my son and my daughter erupted in spasms of glee at the sight, a veritable smorgasbord of hyperactive indulgence.

Because if there is anything I knew for sure in this complicated world, it was that a body could learn a lot about living from carnival rides.

The swings were first. Rusty and worn from endless turns in the summer heat, but still perfectly tuned for their assigned purpose: to spin people around and around through the air at varying speeds. My kids whizzed and zoomed, waving their tiny arms as they passed. Fun, yes. And also valuable later on. Because sometimes in life they will feel as though they’re going around in circles, but that’s no reason to feel frustrated. You can still laugh and wave.

The tea cups were next, which were in amazing shape considering the fact that I found “Pam Luvs Doug 6/9/68” carved into the engine cover. I wasn’t worried, though. Tea cups don’t spin around in a circle ten feet in the air, they jerk and whirl close to the ground. As I watched physics inch my children closer together with each turn of the gears, I found another future lesson for them to tuck away: when life begins to pull and turn, it’s best to stick close to the ones you love.

Fifteen minutes in the Moon Walk proved yet another point—there is an inherent desire within each of us to soar. To break the bonds of both gravity and common sense and rise just a bit higher than the rest, if only for a moment. And though we are earthbound and destined to spend our share of time in the dirt and mud, those precious few moments in the sky are well worth the effort.

From there we made our way to the slide, a gigantic monstrosity of molded plastic that sat a good two stories off the ground. The line was long and the drop was steep, but both children refused to budge. When they climbed those rickety steps and flew down upon those moldy burlap sacks, they screamed and I smiled. Them because they had overcome their fear to magnificent results. Me because I knew life was made for the bold rather than the timid.

The Ferris wheel was the best ride and therefore reserved for last. The flight down the slide had emboldened them to tackle the even bigger ride to the point where they requested a go with just the two of them minus mom and dad.

And things went fine, too. Until the ride stopped with them perched at the top. Flashes of panicky children and flaying limbs shot through my mind but were disproved by the sight in above me.

Rather than terror, my kids were in awe.

Spellbound by the sight of the crowd below and the mountains ahead. Of robins and blue jays flitting past their heads.

I didn’t have to teach them that lesson. They taught me. That sometimes, many times, life can become a bit dull around the edges. The view below can seem drab and worn.

Which is when you need to look up instead of down. Over instead of around. Because life is not only a matter of attitude. It’s a matter of perspective as well.

Hey folks, Lynn Rush over at Light of Truth was kind enough to interview me about my writing and how I managed to sign with Rachelle Gardner, agent extraordinaire. If you’d like to step over there and read part one, it’s here. Part two will run tomorrow. Be sure to tell Lynn hello. She’s a great writer and a great lady.