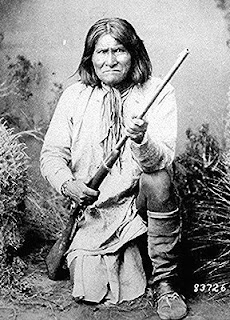 I am standing in the middle of the woods, arms raised in surrender. Surrounding me are two Apache scouts who have warned me in no uncertain terms that one step further into their territory will be the last step I ever take. They mean it, too.
This is the sort of situation I often find myself in. Sad. Also true.
It began with a walk through the woods near my home. Evening. Sun setting and birds chirping, though that did little to ease my discomfort. Something was wrong, which was bad, but I didn’t know what exactly, which was worse. There are times when life becomes more of a trial and less of a joy, and I was mired in one of those times. How or why didn’t matter at the moment. All I wanted to know was what I was doing wrong and how I could make it right again.
So I took a walk.
It didn’t take long, however, before I got the sneaky sensation that I was being followed. Two sets of footfalls shadowed me from behind, muffled by the trees. Too noisy to be animals. But if not, what?
Then: “AAARRRRUUUUUGGGGHH!!!!”
Sprinting out from the trees toward me came two boys dressed in redneck chic—camouflage pants, black T-shirts, and boots—whooping and hollering and waving plastic knives as they charged. My mind raced, trying to figure out what was happening, but all it could do was replay all one hundred and nine minutes of Deliverance. Complete with dueling banjos, of course.
They circled me then stopped, bent over with their hands on their knees and exhausted from the long run. Leather belts were cinched across their foreheads with discarded bird feathers sticking up in the back, giving the appearance of multihued cowlicks. Their faces were painted with what I could only imagine was lipstick. Someone’s mother was not going to be happy.
That’s when I understood. I had been taken captive by Geronimo and Cochise.
“Hold it, White Man,” says the older boy, waving his knife in front of me.
“Yeah,” echoes the younger, who has dropped his knife to catch his breath. “Don’t (wheeze) move.”
I raise my hands. “Easy now,” I say. “I don’t want no trouble with Injuns.”
The boys smile, then quickly returned to character.
“What-um are you doin’ on our lands, White Man?” Geronimo asks.
What to tell him? That I’m in an existential rut and trying to get out? No. Children are happily ignorant of such things.
So I say, “Fine, then. The truth is I’m a cowboy, and some Indians stole my horse and burned down my cabin. I’m out here looking for them.”
More smiles.
“We did it! We did it!” shouts Cochise, who then proceeds to jump up and down and scream “WOO-WOO-WOO!” in an impromptu victory dance. Apache style.
“Looks like we have a fight on our hands, then,” I say.
They pounce the next instant. Plastic blades shimmer in the setting sun, piercing my shirt and jeans. I feel every thrust and slash, tickled to the point of crying.
Victorious, the warriors dance around me, waving their knives in the air and calling the spirits of their forefathers to take notice of their deeds. To them, the Bad White Man has been vanquished. To me, standing there with my arms crossed, I just want them gone so I can get back to the business of figuring out my problem.
Halfway through, they stop their celebration. Delight has turned to disappointment.
“Hey, what’s wrong with you?” asks Geronimo.
“Yeah,” wonders Cochise. “What’s your problem?”
“My problem?” I ask. “I don’t get it.”
“You’re just standing there,” Geronimo explains.
“Like an idiot,” Cochise explains further.
“So?”
“So?” answers Geronimo. “So you’re doin’ it wrong.”
“I’m doing what wrong?”
He sighs the way an adult sighs when trying to explain something very simple to a very simple child.
“Dyin’. Don’t you see? You’re not dyin’ right.”
His words are like magic, the voice of angels.
Not dyin’ right, my brain says. Is that it? Is that your problem? Is that what’s happened to you? Have you gotten life all turned around, thinking that the things you need to do and say don’t need to be done today because there’s always tomorrow? Stop wasting your life! Can’t you see? You’re not living. No one is living. We’re all dying. Every day, every moment is one step closer to your last. Quit sitting around waiting for things to happen. Make them happen. Embrace your days. Ravish them. Don’t worry about living right. Worry about dying right.
Yes. YES!
“You’re right,” I say to them. “Let’s do it again.”
They smile and attack, I laugh and defend. We brawl and battle and wail. Each thrust of their knives brings joyful laughter from the three of us. Finally, I lunge into the nearest bush, clutching my mortal wounds, and then collapse with a flourish into the arms of heaven.
It was a glorious death.