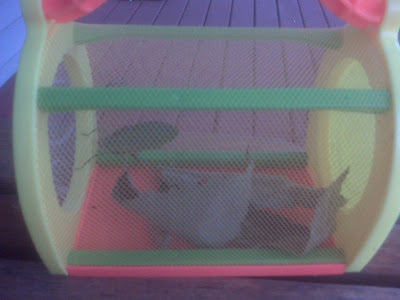 My son raised the plastic container high to my eye level and I peered inside. Behind the white mesh was a pile of fresh grass, a few browned leaves from the maple out back, and one very large bug.

My son was fickle with his toys. Those playthings that were most valuable today will likely be forgotten by that evening and yard sale fodder by tomorrow. But the Backyard Safari Kit he got for his last birthday has endured. I wasn’t surprised. Such a gift spoke to one of the most basic of human needs—to capture the mysterious and give it a name.

So we sat and watched Fred the Bug. Watched him crawl and eat and hang upside down. My son thought it was fascinating. I did not. Because I knew what was coming.

“You know you should let him go,” I told him.

I can proudly say that my son took very good care of Fred the Bug. He fed him and gave him water and made him a tiny bed of grass. He put a tiny mirror in Fred’s home so he’d have the illusion of company. He even told Fred bedtimes stories and included him in bedtime prayers. And all was well.

Until this morning. Until he knocked on the bathroom door as I was shaving.

My razor paused in its downward angle. Uh-oh.

I looked down and into his wondering eyes. “Not generally,” I said.

The two of us walked onto the porch and stared. Sure enough, Fred was belly up. My son shook the plastic house. We both listened as his shell clicked against first one side and then the other. That convinced me. Fred had gone to see Jesus.

An impromptu funeral service was held later that day, complete with a tiny hole dug with my pocket knife and two popsicle sticks taped together in the shape of a cross. Somber and serious, we stood over the grave.

I cleared my throat and began:

“We are here today to honor the life of Fred the Bug,” I said. “Fred was a really good bug. He…crawled…and stuff. And made funny noises with his wings. And he was really, really green…”

I looked down at my son, who looked up and nodded appreciatively. His Yankee hat had been removed and was now nestled in his chest. It was the ultimate sign of respect.

“Fred’s with Jesus now,” I said. “Hoppin’ through those green hills up in heaven. So…we’ll see ya, Fred. Have fun. Amen.”

I left my son to pay his last respects in private, promising yet again to be careful not to mow over the gravesite. There he stayed for about ten minutes, at which point the hat went back on his head and he resumed life as a five-year-old.

I was pretty sure that Fred the Bug would go the way of Nerf balls and Legos. Lost in the shuffle. Next week when I mowed the yard again, I could pluck up the popsicle stick cross and put it in my pocket. Nothing would be said.

But I was hoping something would be said. I didn’t want the lesson of Fred the Bug to be lost on my son. Or on me.

Because like Fred, we won’t last long in a cage. We can’t survive being surrounded by walls, especially those of our own making.

The measure of our joy is the freedom we have, our ability to spread our wings and fly. There’s no doubt it’s a big world out there. Scary, too. And it would at times seem easier and more comfortable to shut us off from it. To shrink the world down into something more manageable. There’s less risk that way.

But the truth? The truth is that when we try to shrink the world, we shrink our hearts right along with it.