Ask any kid—or better yet, search your own memory— and you’ll find the most pressing question in the days proceeding Christmas is three one-syllable words:

I’ve both asked and answered that question hundreds of times in my life (and if I’m honest, I’ll confess to asking and answering it much more now than when I was seven). I think that’s okay. So much is made of how commercial Christmas has become and how secular everything has gotten. Both are valid points. But hey, everyone wants to know when you’ve gotten new stuff.

As for the Coffey household, I’ll say Santa was pretty good to us this year. Some of us would say he was better to us than we deserve. That, too, is okay. What better presents to receive than grace and mercy? Which is pretty much what the world’s presents were on that first Christmas long ago, all wrapped up in bone and flesh and blood.

My son would say we had “a good haul.” A pretty typical response from a pretty average ten-year-old boy. But there’s someone I know who received far more this year, and that’s what I wanted to share.

Many of you know my wife is a teacher. If you have one of those in your life, then you understand my saying that profession could be best described as a thankless one. Lots of work, lots of stress, lots of blame. Sometimes, though, there are those little rays of light that break through an otherwise dour world. One of her co-workers received just that on the last day before Christmas vacation.

This was what a little girl in class delivered to her: 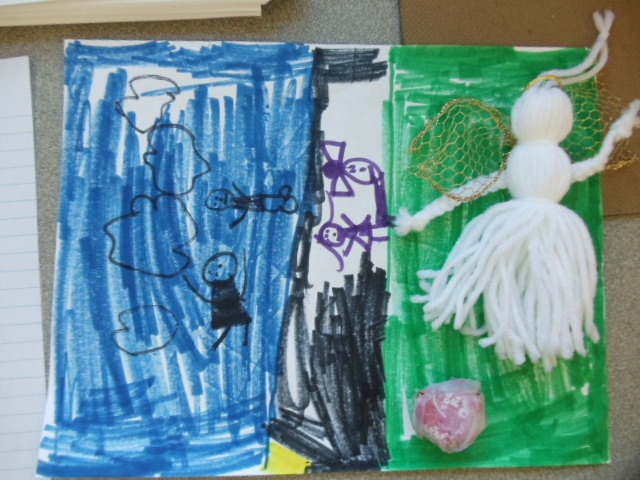 Deciphering a child’s art is an art unto itself. It can often be a tricky thing, even for an experienced teacher. Thankfully, said teacher has spent enough years in a classroom to know just how to coax meaning without offending.

“Tell me about this wonderful picture,” she said.

The girl told her it was the two of them holding hands as they lay upon the playground grass trying to make shapes out of the clouds. The white, winged figure? An angel, of course. It’s a pretty day, she said, but see that swirl of black in the middle on the left side? There’s a bad storm coming. Already, it’s blocking out the sun.

But there was more.

As it turned out, the picture was sort of a stocking stuffer—an hors d’oeuvre meant to whet the appetite for the main course to come. The girl pointed to the maroon blob just beneath the angel, which was not a blob at all. It was a special something packaged in a Tootsie-pop wrapper, held in place by a bit of Scotch tape. Then the girl grinned a big, toothy smile.

The teacher peeled the gift from its place beneath the angel, careful not to ball the tape, and unraveled the packaging. The girl shifted her weight from left to right. Stood on her tiptoes. Licked her lips. Kept smiling. If the teacher didn’t hurry up, she thought her student was going to explode with anticipation.

This was what she found inside: 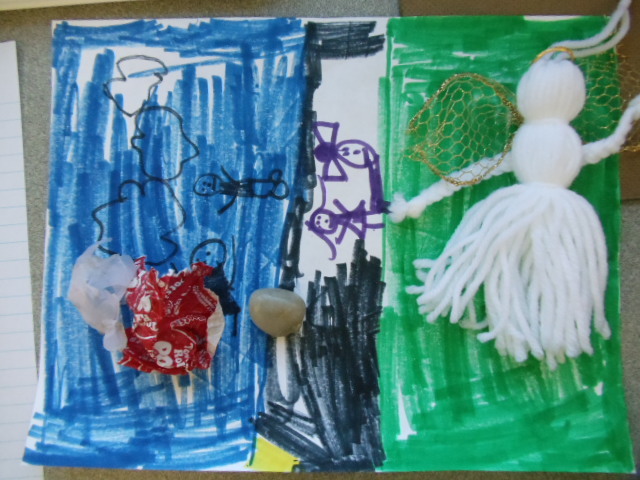 Cheap, some would say. But not in my town. In my town, we know how hard things have gotten because things have always been that way. There isn’t a classroom in my wife’s school that doesn’t contain children who each day arrive in hand-me-downs so threadbare that they are nearly transparent. Children whose shoes are held together by duct tape. Who are given free lunches because their parents are too poor to feed their children or themselves.

And yet these children still come, every day. They still smile and laugh. They still give out of their hearts and their love, even if it is a rock.

I don’t know what that teacher got for Christmas. She has a husband and grown children who all earn livings. I’m sure she received quite a bit, and rightly so.

But I guarantee you that rock is her favorite of them all.