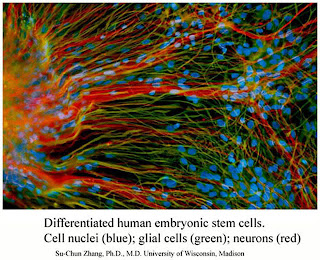 I’m sitting in bed on a Tuesday night that has just become a Wednesday morning, watching reruns of M*A*S*H while sipping a strong cup of coffee. My family is tucked safely into the arms of slumber, but there will be little if any sleep for me tonight.

My daughter is sick.

Stomach ache, fever and all general malaise. Usually an inconvenience for parents of small children, but a big deal to us. Our daughter is diabetic, and anything as small as a cold can either send her blood sugar through the roof or through the floor.

The presence of a fever requires a glucose check every two hours, so to stay awake I have a stack of papers on the nightstand beside me. Hidden among the local and national news is an article from ABC News that I printed off the internet. “Researchers Use Embryonic Stem Cells to Treat Diabetes,” it says.

On March 9, President Obama signed a bill that increased government funding for embryonic stem cells, which can morph into any cell and could theoretically cure a number of diseases and handicaps from Alzheimer’s to paralysis. And diabetes.

These cells are considered by many a potential gold mine for medical advancements. They could both save millions of lives and give life back to millions.

And to this father of this child, it would be an answer to countless prayers.

Of all the traits my wife displays in her life, the one I try to emulate and make my own is what she calls the black and the white. To her, life in this world is either/or. There is no middle ground and no tightrope to walk. Either you do good, or you do evil. Either you do right, or you do wrong. You either stand with the angels, or you don’t.

It’s a way of life that has served her well over the years. If I would have followed her lead earlier, my life would be missing many of the regrets I carry every day. But as I follow her lead now, I’m working on it. Trying.

For instance: my faith states that using embryonic stem cells, even for noble purposes, is wrong. To me and millions of others, these cells are life. And to manipulate them in any way cheapens that life, which is something that happens in our society enough as it is. One of the biggest reasons why there is so much violence and hate in this world stems from the fact we no longer honor life. That it is no longer considered holy and sacred.

This is what I believe.

And yet here we are, so technologically advanced that a few tiny cells could conceivably cure my daughter’s disease. Could give her the new life that her old one was, one without finger pricks and insulin shots and keytones and carb counting.

Do you know what it’s like for your child to look at you through tears and say, “I just want to go to heaven with Jesus, Daddy, because then I won’t feel so bad anymore?”

Because even if I feel that what our president has done in furthering embryonic stem cell research is wrong, a part of me now has hope. And I just don’t know what that says about me.
Because the day may come when I will be forced to answer this question:

If this can cure my daughter’s diabetes, will I withhold it from her because of my faith?

Or will I grant it to her because of my love?