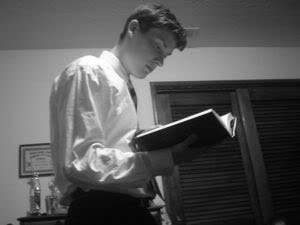 I knew it was a stranger when the doorbell rang. Anyone who was familiar would have either knocked or just walked through the front door. That’s the way it is with country folk. The door’s always open, and you’re always welcome.

He was in his twenties and sharply dressed, shuffling his feet as he waited for an answer to his intrusion. He ran a hand through his hair when I appeared, a last ditch effort to make himself look more presentable. To look perfect.

He had no boxes or bags, no SUV with a vacuum cleaner in the back. Just a book in his hand. A book that he was unknowingly folding in a fist clenched with worried determination.

My initial reaction was to answer yes, I did indeed. That not only did I know Him, we happened to be on good terms. But as we stood there regarding one another, a tiny thought formed deep in my mind and bubbled to the surface.

Here was a young man doing something I could not fathom—knocking on a stranger’s door to talk about Jesus. He had no doubt prepared for this moment. He had prayed and studied and practiced countless times for this one moment. Telling him the truth would get me back to my evening and him back to visiting people who needed him. On the other hand, he might also be a little disappointed.

I saw for just an instant the faint beginnings of a smile upon his lips. This was his chance. What he’d been waiting for.

I stepped between him and the giant painting of The Creation of Man on the wall so my fib could be preserved.

“Well sir,” he said, “if you’d give me a few moments, I’d like to convince you that you really should and offer you this Bible and a prayer of thanks as a thank you for your time.”

“Tell you what, though,” I said, “I’ll give you five minutes. You gonna say that dinosaurs aren’t real and that I’m goin’ to hell?”

“No sir,” he said. His smile brightened and his posture loosened. The hard part was over. “I just want to know how you’re feeling.”

“How I’m feeling?” I snorted. “That’s how you people start?”

“Well, aside from being a little tired from work and a little aggravated at the bills, I’m doin’ just fine. You?”

“Not really,” I said. “I don’t know anything about a hole in me. Sounds kinda sissy.”

“It’s not sissy,” he answered with a shake of his head. “It’s the truth. Everybody’s got a hole in them, and God is the only thing that can fill it. He can give you what you don’t have.”

Those words struck me. God can give me what I don’t have? True. For all of us, in a way. But what He knows we don’t have and what we think we don’t have are two separate things. And in that, I saw my chance. All that young man wanted to do was go to bed tonight thanking God that he had led someone to Christ. I wanted to know how far he’d go to do it.

“Listen to me, buddy,” I said. “My daughter? She’s sick. And my job’s in trouble. Our money’s drying out, the truck’s on its last legs, and our furnace needs replacing. So you tell me giving my life to Christ means He’ll give us health and wealth, I’ll take that Bible and read it cover to cover and you can pray with me all you want.”

He stood silent in front of me. This was it. The moment of truth. And though I couldn’t say for sure, I could imagine what he was thinking.

But I was wrong.
“I can’t promise that,” he said. “Look, I’ve only been a Christian a few years. A lot of things get harder. Sometimes it feels like God’s not even there. Some days you’ll still hurt and worry. But the thing is, it’ll be okay. You’ll still mess up, but He makes it all good. It’s not easy, but it’s worth it.”

There. He said it. Not what I wanted to hear, maybe even not what he wanted to say. But he said it.

I realized then that God was smiling upon that man, whether he succeeded or not in sharing Christ with me. As much as God commands our love and faith, He also commands our obedience. Not only to Him, but to the truth about Him.