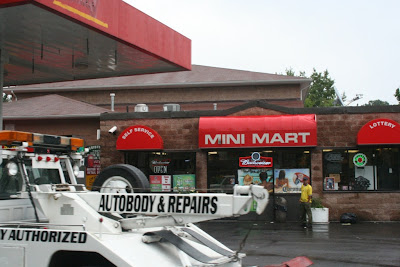 Saturday afternoon, early August. Hot and humid or, as the locals call it, “close.” Mood? Questionable. Thirst? Very. So I pulled off the road along US Route 11 and into the parking lot of a no-name service station, the sort of which was what you’d expect for rural Virginia—dirty windows, questionable service, and people who made putting up with both well worth the effort.

The man behind the cash register greeted me with a “Howdy” as I walked through the doors, each of which had been propped open by two twelve-packs of Budweiser. I nodded back and made my way toward the drink cooler in the rear of the store.

“BETTER ONES UP HERE,” shouted a voice.

I turned, and there beneath the mounted head of a deer sat an old man. His red suspenders clashed with his brown pants and blue shirt. He twisted in a vinyl chair and tapped his cane on the bin beside him.

“ICE MAKES ‘EM COLDER THAN THAT GOL’-DARNED ‘FRIDGERATOR CAN,” he shouted again.

“YOU GOT A POINT THERE.”

I grabbed a Coke from the bin and swabbed the condensation with my T shirt, nodding once more. The old man wheezed and coughed a hunk of phlegm into his handkerchief.

I took a sip and paced the store, taking stock of the sardines and canned vegetables, both of which had expired three months prior.

A mother and her brood of three came in just then, all of whom got their own howdy from the cashier. The kids made a bee line for the magazine rack while mom paced the aisles in search of an elusive Something.

“Do you sell salt?” she said to the cashier.

“LAST AISLE, YOUNG LADY,” the old man said, pointing his cane to the opposite side of the store. She smiled a thank you, and he smiled a you’re welcome.

He wasn’t done, either. In the next fifteen minutes, the old man had noticed the keys a customer had dropped, reminded another that his headlights were on, and squished a rather nasty cockroach.

“You have a pretty good helper over there,” I told the cashier as I paid.

He smiled and said, “Yeah, Hank’s been around forever. Used to own the place until he started getting sick.”

As if on cue, Hank began hacking again.

“So he still comes around?” I asked.

“Yep,” he said as he offered my change. “He’s deaf, weak, and the doc told him last month all those non-filter Camels have eaten his lungs up. But he still shows up every day wanting to help out and do somethin’.”

I shoved the change into my pocket and looked at Hank, who had made himself busy by using his cane to scrap half of the dead cockroach from the bottom of his boot.

I had to smile at the sight. Though I knew nothing of the man, it seemed so utterly Hank.

That a simple man in a no-name gas station on a summer afternoon could teach me something was a little unexpected, but then again there are lessons to be learned in most anything. Especially in the sight of an old man clinging to what little life he had left.

Strip away theology’s pretense and philosophy’s theories and we are faced with this one basic question when it comes to the conduct of our lives—what does God expect from us each day?

Over the years I had come up with many possible answers—to love Him and others, to do our best to leave the day a little better than we’ve found it, and so on. But after watching Hank, I knew the real answer to that question.

What does God expect from us each day? Simple.

We can give God our hearts and our desires, give Him our minds and our talents, but if we don’t give Him our time, those things just don’t matter.

Poor Hank could have spent his last remaining days at home watching HGTV, but he didn’t. He still showed up in that little gas station every day willing to do whatever he could to help despite his weaknesses and infirmities. I think we should do the same.