It’s funny how old memories can sink with the weight of new ones only to bubble up again. Tiny moments you thought had been long blown away by life’s continual wind circle back and stick to you like a burr. You find that memory is suddenly everywhere.

That’s what’s happening to me right now. One little memory.

I don’t know why it bubbled up again, don’t know why it’s sticking. I think God often makes us remember things in the past that could serve as the basis for some sort of wisdom now, but I can’t imagine how that’s the case with me. And it’s a painful memory, one I’d like to see sink back down in my mind for as long as possible. I figure writing about it may help. Or, perhaps, it may help you. In either case, it will serve its purpose.

I was ten years old, an age that is largely spent balancing on that thin line between knowing much about the world and not wanting to know. It was summer. I remember it was hot. I remember the crowd, too, and thinking it was more people than I’d ever seen in my life.

They were all gathered around two farm wagons that had been towed into my grandparents’ backyard and placed side by side. They sat in the open space between the garden my grandmother and I once worked and the giant willow tree I spent hours swinging from. There was a small patch of spearmint that grew at the base of the tree. Grandma would pick a few leaves and make tea with them just for me. I remember the people clamoring around the tree that day, trampling the patch.

I think that’s when I began to realize everything was ending.

The white Cape Cod my grandmother and grandfather had lived in for nearly thirty years was showing wear. The siding had been dulled to an almost gray by the sun. The shingles on the roof were brittle and stained by rain and wind. The house looked tired. I remember that, too. Everything looked tired.

The people who stood on top of the two giant wagons looked just as weary. My mother was one of them. Also an aunt and two uncles. They would each hold up what was in their hands as the man with the microphone yelled to the crowd in a language that was both foreign and fast. My mother held up a painting of a cabin that hung in my grandparents’ living room. I remember I would often sit on the sofa and stare at that painting while Grandma and I drank our spearmint tea. I would tell her that one day I wanted to live in a place like that. I still do.

The man with the microphone yelled more, numbers I knew mixed with words I didn’t. My mother kept her hands raised. One by one, others in the crowd raised theirs. I wondered why she looked so sad with all those people waving at her.

She put the painting down just after the man with the microphone said the one word I did understand:

I remember my father standing beside me. I asked him, “What’s going on?”

He didn’t tell. Instead he put his hand on my shoulder and led me over to the apple tree. He picked one from a high bough, rubbed it on the leg of his jeans, and offered it. I still remember how that apple tasted.

As I said, I was ten. Balancing on that thin line. But on that day the line was thinner than I cared it to be. I was old enough to know my grandfather had died and my grandmother before him, young enough to still believe I would still come and work the garden and drink the tea and stare at the painting of the cabin. I wobbled on the thin line that day between the memories I could keep and the memories being sold.

I suppose I wobble still. 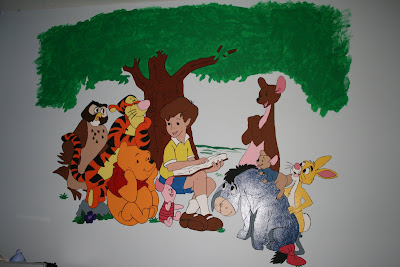 I sat on the edge of my son’s bed and tapped the paintbrush against my hand.

“You know that brush is wet, right?” my wife asks.

I don’t. Not till then. I smear the blue against my jeans, thinking that if I had bought them at the store like that, it would have set me back about a hundred dollars.

“He said he did,” she answers.

“Do you believe him?”

She pauses then says, “I don’t want to.”

Another pause. Then: “Right.”

We had painted the Winnie the Pooh mural when our daughter was born, and she had slept beneath it for two years until she had to move out to make room for our son. But at five, he thinks Winnie the Pooh is for kids. And he is no longer a kid. My task today is to erase it. To paint over it and cover it up with pictures of Derek Jeter and Lou Gehrig.

I do not want to do this.

So this morning I painted the trim, the doors, and the other three walls, trying to postpone the inevitable. But with everything else done, the inevitable is here.

It’s just a stupid wall, I tell myself. But it’s not, and I know that. This is a symbol. A memory of the fear and joy of becoming a parent for the first time.

You battle the passage of time with your children. You fight to keep them small and innocent and on your lap. And even if you know they will soon be big and experienced and on their own, you fight anyway.

Painting over this feels like surrender. And I’m not quite ready to wave the white flag.

Somewhere in between, my son will realize something. He’ll find the truth about his old man. He’ll discover that I’m really not the superhero cowboy he thinks I am. That I might be tough on the outside, but I’m pretty soft on the inside. That I can’t fix everything, don’t know anything, and fret over a lot more than I let on.

He’ll have his own life with his own family. I’ll have to let him go so he can find his own way.

Such is the constant churning of life, ever forward and never backward. And though we plant our shoulders to the gears of our days and beg them to stop, they roll on anyway.

But just as I am ready to surrender after all, I spot something on my son’s dresser that makes me smile. Sitting there beside his Lightning McQueen lamp is my father’s wallet, left by him just a few hours ago. My normally steady hand seems to disappear whenever I’m painting trim, so I had called him for a little help.

A lot has changed in my life since I was my son’s age. A lot hasn’t, too.

Still, after all these years, my father is there for me. There to help me fix the truck or cut some wood or tend the garden. There for advice or wisdom or to shoot the breeze.

The fact that I have my own life and my own family, the fact that I’ve found my own way, hasn’t changed everything. Time doesn’t always break our bonds. Sometimes it grows them deeper.

I move from my son’s bed to the tray of paint next to the wall, pick up the roller, and begin. Gone is the leafy tree, pouty Eeyore, Piglet, and Tigger. Gone is Christopher Robin and the unknown book he’s entertained his friends with for over seven years. And then, finally, Pooh is gone, too.

And that’s okay. Because as I paint I have in my mind a far-away picture of another man’s house and another child’s dresser. And I think of that man sitting upon the edge of that child’s bed, staring at my wallet. 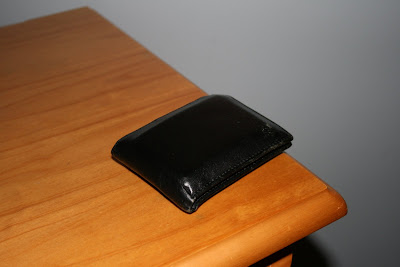 Buy all the books you want about how to raise a child into a fully functioning and responsible adult, and you’ll be wasting your money. I know that’s a pretty broad statement, but I stand by it. Because it doesn’t matter what Ph.D. says what or how much Biblical wisdom people can give you, in the end you learn by experience. This I know.

I know this, too—you learn to pick your battles with your children. Which means making them earn an allowance to buy the toy they desperately want rather than simply handing over the money, but treating them to a Slurpee when they pine for one as you drive by the 7-11. Simple enough. At least, it usually has been.

But then came my daughter’s fingernails.

Coffey women tend to have the reputation of being both ladylike and tomboyish, depending upon which the situation warrants. Which means my daughter will strut around all day long giving tea parties in her Sunday finest, only to hit me in the head with a pillow and want me to wrestle. I honor both. It’s good for girls to have tea parties. Good for them to know how to scrap, too.

The problem was the fingernails. Good for pouring tea and wearing dresses. Bad for rolling around on the floor with daddy. So when our impromptu grudge match the other night resulted in me looking as if I’d been attacked by a Komodo dragon, I called time out and grabbed the clippers.

My daughter didn’t protest. Not yet. She simply stood there and stared, wondering how she could explain what she needed to.

She sat down with the sort of thump that would one day evolve into something that would seriously frighten her husband. When I took her hand, it was a fist.

“Well, unless you want me to go upstairs and get the boxing gloves, I’m gonna have to.”

The thought occurred to me that this was some sort of game, the object of which was for the both of us to see if I could get her fist open. I tried. She didn’t like it.

“Okay,” I said. “Why don’t you want me to cut your nails? Girls cut their nails. It’s popular.”

She said she would explain, but I had to put the clippers down first. I did. Then my daughter raised her hands palm up and fingers wide, and told me the story of her day.

The bits of brown and green on her nails were from her work in the garden that morning. A smidge of white paint was on her thumb from the picture she made after breakfast. She pointed out a spot on her pinky that seemed indented, put there by a stubborn drawer she’d helped her brother open. An orange stain from that afternoon’s popsicle. And though the evidence was scant, she swore there was a spot on the ring finger of her right hand where a firefly had landed and made her smile.

“How am I supposed to remember all that,” she asked, “if you cut my memories off?”

Like I said, you have to pick your battles as a parent. You have to learn when to raise and when to fold. I folded. A little pain on my part would be a good enough trade to keep her memories safe.

I wonder a lot whether I’m living the way I should be. Life can get so complicated when you’re an adult. I try to make sure I do more good than bad, but it’s hard to keep track of it all.

Which is why I’ve been paying attention to my own fingernails lately. It’s something I don’t normally do but maybe should do more of. Because I know if there’s evidence there that I’ve worked and created, helped and smiled, then I’ve had a good day.

This post is part of the blog carnival on Summer, hosted by Bridget Chumbley. To read more, please visit her site.