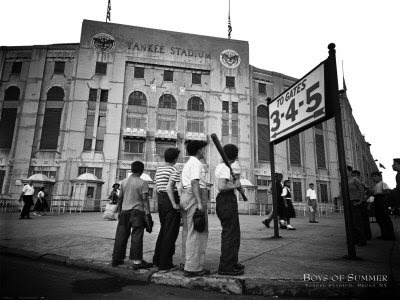 There are sounds that stop at the ear and others that venture farther, vibrating our very hearts. Chief among these in my life is the sound of bat meeting ball meeting glove. Of the many soft spots in me, few are softer than baseball. Fewer still are softer than a pickup game played by a handful of boys on a lazy summer afternoon.

Which is why last Sunday I walked across the street from my parents’ home to the local baseball field, where eight boys were playing a small town version of the World Series.

I sat in the bleachers watching them play and listened as they spit and cussed and insulted. It didn’t take me long to realize that despite the years between us, life as a boy hadn’t changed much. I saw in them the me I once was. And as they stole the occasional look into the stands, I couldn’t help but think they saw in me the them they would become.

A brilliant but purely accidental catch by the left fielder ended the visitor’s half of the inning, and the teams changed positions, moping on and off the field. I wrinkled my brow. I didn’t know what the score was, but the game seemed close. Surely even enough to motivate the players to go hard and get dirty.

“What’s the score?” I hollered.

Eight sets of confused looks stared at me.

“We’re not keeping score,” said another.

“What do you mean you’re not keeping score?” I asked. “How do you know who’s winning?”

I sat there silent, trying to process the words.

“You mean you don’t want to win?” I asked them.

“No,” said the pitcher. “If one of us tries to win, then someone has to lose.”

“You gotta be kidding me,” I said. “What kind of garbage is that?”

Since it was Sunday and most of them had already heard one sermon, I didn’t bother giving them another. I did, however, inform them they would likely change their minds one day. There are certain childhood illusions that one should hang onto, and there are others best suited to be left behind.

The irony, of course, was obvious. Here were eight boys determined to squeeze equality out of a game designed to display one of life’s greatest truths – some triumph, others lose.

We would like to believe otherwise. In fact, there are many who work hard for a world where everyone is a winner and no one is a loser. Honestly, though? Despite what our children may watch on television and you may hear in church, not all of us are winners. There are plenty of losers out there, too. There, I said it. Welcome to reality.

But what separates the oysters from the pearls? What is it that makes someone a winner in life and someone else a loser?

The answer, I decided, wasn’t anything as shallow as money or status. No, the oysters and pearls of this world were determined not in leaps and bounds of fortune, but slowly in the small moments of the everyday.

Or having faith when doubt seems much more reasonable.

It’s risking love rather than accepting loneliness and trusting someone other than yourself.

It’s rising to a new day and daring to say “Good morning, Lord!” rather than “Good Lord, morning.”

It’s knowing that just because you can’t dry the tears doesn’t mean you can’t wipe them away.

It’s getting up, falling down, and getting up again.

That’s being a pearl. That’s a winner.

The boys resumed their game, still playing as though they didn’t care. I could understand then why. I knew why there was so much moping and trudging on that field when there should have been laughter and running. And for that matter, why it was the same in the world. Because to them and to many of us, becoming who we can be, who we should be, didn’t matter. No one was keeping score, anyway.

The truth was that life was rarely neutral. It exacted from us the price of a daily choice to live with passion or resignation. Ours was not an existence of neither/nor, but either/or. We’re either living or dying, doing or dreaming.