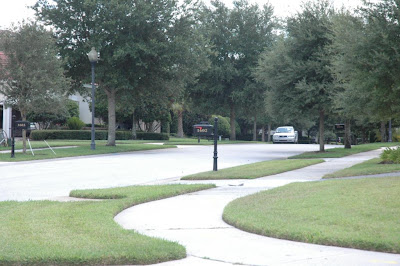 I’d spent every afternoon that week repaying a favor. Peter had helped me install some flooring in my house, so helping him repaint his garage was the least I could do. It was good, honest work. Also a little dull. But we received more than enough entertainment from Peter’s neighbors across the street.

“Transplants from the city,” Peter said. “Mister, missus, and six-year-old Mary. Good people. Mary could be a handful, though.”

Peter had been known to offer the occasional understatement.

Mary’s father visited us one evening under the guise of interest in our painting. After a few minutes of polite banter, he got down to business. Despite all of their efforts to create a stable and safe play environment for Mary in their fenced-in backyard, she now wanted to begin playing in the front yard.

“Traffic’s bad out there,” Peter said.

“That’s what her mother and I said,” Mary’s father answered. “But she’s a good girl and she knows to stay out of the road.”

Peter and I exchanged a look.

Mary’s father continued: “My wife is busy with her home business during the day. She can’t mind Mary in the front yard like she can in the back. The fence is a good babysitter. But since you guys will be out here painting anyway…”

“We’ll watch her,” Peter answered him. Then, under his breath: “Somebody’s got to.”

The next day, Mary followed her father out the front door as he left for work. He opened the door of his SUV, bent down, and whispered one last don’t-go-into-the-street warning into his daughter’s ear, wiggling a forefinger for emphasis. After a peck on the cheek, he climbed into the vehicle. They exchanged waves as he left.

Mary’s mother poked her head out of the front door while talking into the Bluetooth headset clamped onto her ear. She smiled and went back inside to tend to business.

Mary had reached the edge of the driveway before her mother had shut the door.

Peter and I paused in our painting to stand guard. Mary eyed the pavement. Quick glances at first, then longer stares. She looked down the road to her right, then left, then back toward the house. Then Mary raised her right leg, leaned back slightly, and gently touched the toe of a small, pink shoe onto the dark blue pavement.

She spun on her heels and raced back up the driveway to the safety of her porch. Even from across the road, I could see her panicked breaths.

It was Mary’s first taste of defiant self-assertiveness. And it looked like it tasted just fine.

Two hours later, Peter and I were painting the back side of the garage when there came the sound of brakes meeting rubber meeting pavement, followed by the bellow of a horn. We raced around front to find Mary joyous, jumping up and down and waving to a blue Toyota, the driver of which had her hand to her chest and her mouth wide open, no doubt contemplating both the suddenness of life and the consequences of vehicular manslaughter. Mary’s mother raced out the front door, scooped her daughter up in frantic arms, and whisked her inside.

Mary and her father strolled across the road that evening to see how the garage turned out. The four of us sat on the back deck and examined both our work and Mary’s adventure.

“I just don’t understand it,” her father said. “She knows better.”

Mary looked up at her father and smiled, then asked if she could help me clean the brushes.

Curiosity got the best of me while we scrubbed the bristles. “Mary,” I wondered aloud, “why did you go out into the road?”

“Because I wasn’t supposed to,” she said again.

And then I understood. Within each of us resided a hint of rebellion. What made us human wasn’t our ability to know what’s right, it was our tendency to know what’s right and do wrong anyway. Like Mary, we all stood daily at the edge of should and should not, torn between what we know we aren’t supposed to do and the overwhelming desire to do it anyway. Sometimes, we stepped back from that edge. Other times, we stepped forward. Either way, it was our decision. Fate and destiny were no match for the human ability to choose. It’s what made us so special.

It’s also why we tended to make such a mess of things.

Mary, I knew, would learn all of this the same way I did, the same way we all do. She would grow and experience, fail and hurt. She would gather regrets that would haunt her and joys that would sustain her. And when the time came, she would vow that her children would not suffer the same mistakes she had made.

But as we both sat and scrubbed the paint brushes, I could envision some distant tomorrow when Mary would tell her own child not to play in the street. And I could see a few minutes later another small shoe tip-toeing the edge, teetering between should and should not, then gently stepping into the world of the forbidden.