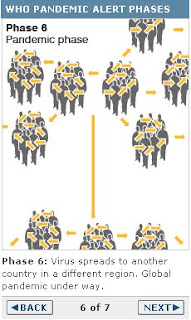 I saw my first anti-swine-flu-surgical-mask-wearing person yesterday. At Wal-Mart, of course. Standing in the express line with a shopping cart full of Lysol, Tylenol, latex gloves, bottled water, and, strangely enough, picture frames.

Her posture was stiff and alert, which made it easier for her to keep a vigilant watch over the no-fly zone she had mentally cordoned off around herself. Anyone or anything germy that approached was shot down with a laser-like stare.

I’d heard that the top three bestselling items at amazon.com the past week were three different brands of surgical masks. Drug and department stores couldn’t keep them in stock. And a lot of other people felt the plain old masks from the local Rite-Aid wouldn’t do. They needed extra protection. So now even the Lowe’s next door was running short on the thick industrial masks that were guaranteed to keep everything out. Including oxygen.

I assumed that she would make it safely through the checkout line and back home, where she would undoubtedly proceed to fill sandbags, listen to her ham radio, and clean the shotgun she would use to fight off the flu zombies. I couldn’t be sure, though. I didn’t stick around. Instead of making an attempt at conversation, I swung wide right and went the other way. Which was probably for the best. Even if she wanted to talk to me, she probably wouldn’t have. And how well can you understand people talking through those masks, anyway?

I wasn’t making light of both her and the whole swine flu thing (now called H1N1, by the way. It sounds more clinical). I knew this was serious, that people had died, and that paranoia was spreading faster than the virus itself. Yet it seemed as though every day brought a new Something that beckoned us to shudder and bite our fingernails in dread. There was only so much life-altering news I could take in a short amount of time, and I’d gotten a little callous in the process. If the Chinese invaded tomorrow, I’d probably just yawn and go back to bed.

Sure, I was concerned. How could I not be? It was all over the news, and the Vice President had all but dared us to go outside our homes. I just hadn’t progressed to the mask-wearing point.

My mind ambled back to one of my earlier thoughts: how well can you understand people who are talking through those things? I’d seen actors on television talk just fine while wearing them, but that’s as close as I’d gotten.

Not having anything better to do, I decided to ask the pharmacist. Yes, he said, you can talk through them. And yes, you can be understood.

He said this with the supreme air of confidence that you tend to get from a Wal-Mart employee. But I still didn’t buy it. A mask might let words through, but it hides the important things. I can say I’m happy, but the smile that accompanies those words is proof. And I can tell you I’m upset, but you wouldn’t be sure unless you saw me frown. Most of our communication goes beyond vocabulary. If you want to truly understand people, you have to do more than listen to them. You have to look, too.

“We can’t keep ‘em,” the pharmacist told me. “Everyone’s afraid.”

I could understand. Because we all put a mask on when we’re afraid. We all drew an imaginary circle around our hearts and dared anyone to come too close.

We all tried to keep the world from us, never pausing to consider that by doing so we also kept us from the world.

“So do blessings,” I said. Then I smiled, and walked on.