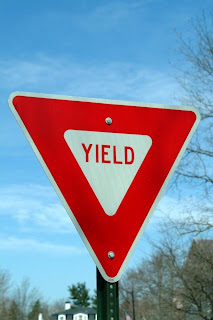 A neighbor down the street has been busy for the last month or so easing his son into what is perhaps the biggest step toward adulthood that a young person can take—getting a driver’s license.

It’s been rough going, the father told me. And maybe a little disappointing, too. Because where his son has been the epitome of intelligence, responsibility, and maturity before, he is now managed to transform himself into a negligent, childish idiot. His words, not mine. Though I do understand what he’s feeling. My father was like that when he taught me how to drive.

The driver’s license is an amazing thing. We don’t have many rites of passage in our culture. There are few elaborate ceremonies to mark the going out of Child and the coming in of Adult. That laminated piece of paper with our picture and vital statistics is as close as we get.

I’ve seen the two of them in the evenings, driving up and down the road with varying degrees of success. The boy always has a look of sheer joy plastered on his face. The father looks as though he is sharing a ride with the Angel of Death. It’s quite comical, really. Until I pause to think that in ten years or so, I’ll be doing the same thing.

The behind-the-wheel part of his son’s education is being supplemented by a little classroom work, too. His father has come up with what he calls the Rules Of The Road. Principles that, if heeded, will keep his son both out of trouble and the hospital.

The Rules are taped to the steering wheel of the battered Ford truck that will soon become his son’s primary mode of transportation. They are also hanging from the refrigerator in the kitchen. And tacked onto the wall beside his bed. There are also pop quizzes.

I gave my own pop quiz to the boy yesterday. Tell me the five rules, I said. He rattled them off like a soldier relaying his orders:

This is serious stuff. And I think it’s working.

Take rule number one, for instance. Be safe. There is a lot of danger in life. Some of it sits and waits for us to stumble upon it, and some of it is out there trying to find us.

Checking your mirrors is also important. Since we tend to associate with those whom we share common traits and values, the friends we have and the company we keep are mirrors for ourselves. So, too, are our children. They come into this world as a blank slate, and for the first years parents are the ones who hold the chalk. What they become is often our own self-portrait, just miniaturized.

And as there are plenty of signs on the road—Stop, Yield, Merge—that if disobeyed will and you in front of a judge. But there are plenty in life, too. Warning us, helping us, keeping us safe. Heed them and all will be well. A good thing to keep in mind, since we’ll all have to stand in front of the Judge one day.

And then there was rule number seven: enjoy the ride. Put there by his father because he wanted to end things on a high note, and put here by me for the same reason. Because following The Rules isn’t designed to make things less fun, but to make us more happy.

Enjoying the ride is the boy’s favorite rule, by the way.