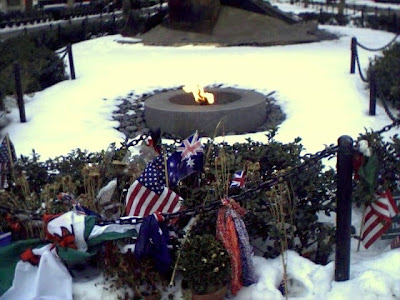 I spent the majority of my day eight years ago today sitting on the edge of my bed in my bathrobe and staring at the television.

I was alone that day; my wife was at work, and I had had planned on enjoying a quiet and uneventful day off. By ten o’clock, though, I knew I’d have neither.

I woke and turned on the television for the morning news, expecting the same old depressing stories of who did what to whom. What I saw instead was difficult to watch and impossible to process.

A plane crashing into a New York City building. And then another.

People hurtling hundreds of stories to the ground, choosing death by gravity rather than fire.

Another airliner crashes in a Pennsylvania field, killing everyone onboard.

And finally, another hits the Pentagon.

Voices of normally stoic newscasters crack with emotion. Facts mix with conjecture and serve only to add to the confusion. One tower of the World Trade Center collapses and then the other, killing scores of police officers, fire fighters, and EMTs.

As the hours pass, all thoughts of malfunction and accident are laid to rest. No, this is an act of intent. Of purpose.

And as I sit on the edge of my bed staring as those images are repeated over and over again, a tiny thought manages to claw its way to the front of my mind:

I was right. Everything did change that day. Every generation has that moment when innocence is lost, when the veil of security is lifted to reveal the truth about this world—that it is a hard place, full of darkness and hate. For my grandparents, that moment was World War II. For my parents, Vietnam. And for my generation, it was 9/11.

Of all the images that day and the days thereafter, it’s the planes I remember most. Not the ones who served as instruments of death. The other ones.

At some point every day for thirty years I had cocked my neck and looked up to stare at a mechanical something flying overhead. The skies above the Shenandoah Valley serve as a highway for all manner of jets and helicopters. And I’ll be honest. I hated it.

I hated the noise they made and how they got in the way of the clouds. I hated their dirty contrails that streaked across my sunset and sunrise. I always thought things would be a little more peaceful around here without them.

But then that happened.

For three days after that September day, the skies above my home were the sole property of clouds and birds. The government had grounded all air traffic. The skies were both silent and empty, a reflection of what we were all feeling. For seventy-two hours there were no booming jet engines, no swooshing of rotor blades, no contrails that colored the evening sky.

And I missed them.

I missed them because it was proof that life had stopped proceeding as usual. We had been shaken to our very foundation.

As sad as that day eight years ago was, the saddest days came later, when a country that was brought together by a tragic act was torn apart by its equal—the politicization of that act. The righteous indignation that was warranted and even necessary was replaced by the need to blame ourselves and explain our attackers, as if three thousand innocent people could be held at fault and insanity could be explained.

But that’s not what I’m dwelling on right now.

I just walked outside to make sure the sun was still there. It was, along with four airliners, a helicopter, and one single-engine plane. Life is proceeding as usual now, and has for a while. There is a great deal of comfort in that. Too many of us long to break free of the status quo. Sometimes that’s the very thing that brings peace to our lives.

Americans are tough people. The toughest. We can be knocked down, but we’ll get up angry. We can suffer, but our suffering emboldens us. And we can despair, but that cannot kill our hope and our resolve. Our enemies found that out eight years ago.

I think we did, too.

(This column was published in the Staunton News Leader)