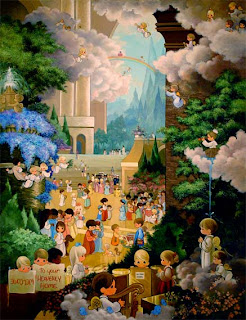 A father seldom thinks things through before asking his children what they want for their birthday. He just says it. He thinks their answer will be an easy one. A new doll, maybe. Or the latest action figure. But what he does not consider is that their answer may be something utterly different and much more difficult than having to run to the store the next day and plop something down in front of a cashier.
I learned all this over the weekend. “What do you want for your birthday?” I asked my daughter. Her reply?
“A sleepover!”
So. My wife and I played host to three six-year-old girls last night. Having such young children sleeping at your house and away from theirs for the first time was something for which I admit I was not prepared. For the screaming and yelling, yes. And the mess, absolutely. I was even prepared for the dent that some tiny body part knocked into the living room wall.
But I was not prepared for Curly Sue. Not one bit.
Susan was her given name. But the dark brown locks of hair that adorned her head demanded a temporary nickname. Curly Sue had never spent more than a few hours away from her parents. The likelihood of her actually staying the entire night was slim. But she was determined. Curly Sue stepped through our front door with a pillow, a sleeping bag, and a knapsack full of toys. She was there to stay.
All went well that evening. Until bedtime, that is. Then things began the sort of downward spiral that can happen when you have a house full of little girls.
It started with goodnight prayers. Girls in a circle, taking turns praying for mommy and daddy and for God to make their stomachs quit hurting from all the popcorn. When it came time for Curly Sue’s contribution, though, there was only silence.“Do you want to pray, Susan?” asked my wife.
A tiny nod.
“Okay, go ahead.”
More silence. Then, five words: “God, I wanna go home.”
Uh-oh.
Four phone calls to her mother later, and Curly Sue decided to be strong and stick it out. She didn’t want to leave her friends, but she didn’t want to stay, either. Could everyone go with her back to her house? she asked.
It wasn’t that she wasn’t having fun. Curly Sue said she was having much fun. She loved our home and having her friends around, and she really loved all the popcorn. And there was so much to do! But as much as she was enjoying herself and her surroundings, she couldn’t shake the feeling that she wasn’t where she should be.
“It’s just not home,” she told me.
The girls were asleep by eleven. By one, Curly Sue had appeared at our bedside twice. “I wanna go home,” she said. Both times.
Instinct woke me at six thirty when I rolled over and found no one beside me. I got out of bed and walked into the living room in search of my wife. I found her and Curly Sue in the rocking chair by the window, gazing out into the evaporating night.
“Just wait a bit,” my wife was telling her. “The sun’s coming, you just wait and see. And when the sun comes, it’ll be time to go home.”
Curly Sue smiled. Me, too.
Because I, too, am a little visitor in a big place, and I miss home.
Oh, it’s wonderful here. Beautiful. I have fun, I’m around people I love, and there’s so much to do.
But it’s just not home. No, my home is somewhere else. Somewhere on the other side of this life. Somewhere perfect.
Like her, I’m torn. I want to go home, but I don’t want to leave anyone here, either. I want everyone to come with me so we can all have fun.Some days, many days, I like it here. But there are days when the weariness of this world weighs on me. When I long for the day when laughter won’t be so fleeting and hope won’t be so hard to find.
Those are the days when I seem to sit by some unknown window and gaze out, trying to will the darkness to fade and the light to shine.
Because I know that when the Son comes, I can go home.