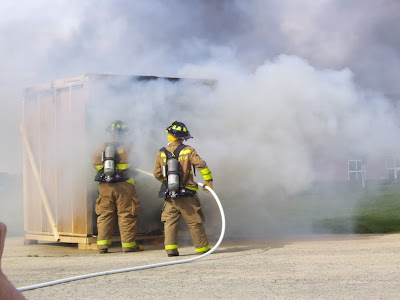 Our fair town has all the modern conveniences of any big city. We have a post office, paved roads, working stop lights, and a sign outside the bank that tells us what the temperature is. We also have cell phones, DSL, ATMs, and several institutions whose sole purpose is to deliver artery-clogging fried food as quickly as possible.

We’re contemporary, our little settlement. Not chic, maybe. But not archaic.

Except for when something catches on fire.

The local fire department is sandwiched between The Old Schoolhouse Restaurant and the baseball field. Whether this is by design or chance is unknown to me and not really a matter of consequence. Either way, its location is perfect. The firehouse is smack in the middle of town.

Jutting out from the top of the building is a steel tower with a horn at the top, put there years ago for the simple reason that our firefighters are strictly volunteer. No one here is a fireman as much as a fireman-slash-something. We have firemen/farmers, firemen/business owners, and firemen/retirees. So even though someone is always milling about the firehouse during the day, the majority of our rescue personnel are busy making a living elsewhere. That siren comes in handy.

Since I live and work outside of town I’m not really sure if they use the siren as often as they once did. Cell phones and pagers may have rendered the siren obsolete except for announcing the start of the town parade every July.

When I was a child, though, things were much different. I grew up about three streets down from the siren, close enough to be a weekly witness to its terrors. I never got used to the rising and falling whine that would overcome the birdsong and the rustling leaves. I’d run into the house with my hands over my ears, trembling.

It wasn’t so much the sound that bothered me, it was what the sound meant—trouble. Grave danger (“Is there another kind?” Extra points if you know the movie). It meant lives were in peril.

Though I was too young to adequately process what was going on, hearing that siren was proof of a basic law of life I desperately wanted to avoid accepting. Even though my world was blessed with the usual, the unusual could bare its fangs at any moment. Life could still find you and leave you battered, and there just wasn’t a whole lot anyone could do about it.

One dollar was more than enough compensation for a week’s worth of making my bed and emptying the trash, especially when it bought me three packs of baseball cards. A 1979 Topps Reggie Jackson was what I’d been after all summer, and I was bound and determined to find one.

I jumped the ditch between the road and the parking lot and skidded to a stop near the trash cans outside the store. There stood two farmers, sweaty and smelling from a day’s work in the fields and drowning their sorrows in two bottles of RC Cola.

They nodded and I sir’d them both, and just as they were about to resume their conversation, I heard the low guttural sound of artificial noise.

The siren had begun to go off.

My knees buckled and I froze, unsure of whether to jump on my bike and race home or find comfort in the back aisles of the store. It was a moment of indecision that felt like an eternity.

I looked to the farmers for help, but they had forgotten me.

“Time to go to work,” one said to the other. They both tossed their half-full bottles into the trash, raced to their trucks, and sped off toward the firehouse. Moments later the larger of the town’s fire trucks sped by, siren wailing. One of the farmers was driving. The other hung onto the back, steely-eyed.

It was true, I decided, that there were neither guarantees nor givens in life other than this one simple truth—sooner or later the siren will sound, and it may well be for you.

It will sound the first time your heart is broken or the first time you faith is tested. It will echo when your dreams shatter into a thousand gleaming splinters or your trust crumbles under the unbearable weight of disappointment.

When the shadows of your yesterday match your every step today. When expectations seem too large and strength too small. When the rising sun becomes more a cause for dread than joy.

That’s when the whine will rise and fall. When we are faced with this one choice—whether to flee or stand, run away or toward.